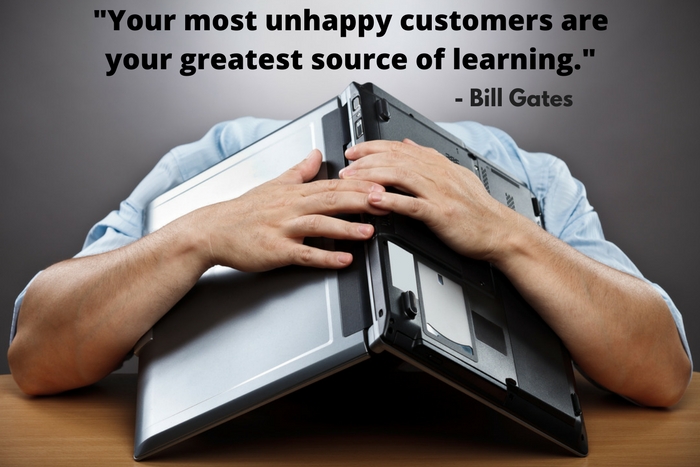 A business owner recently shared they had surveyed their customers for the first time ever and so far the feedback had been terrible. Almost none of their responses had come back complimentary.   Consequently, the leadership team was really down on themselves over some of the comments and criticisms about the company.  Overall the survey results were hurting company morale more than helping it.

The results they were hoping for were not what they were getting and they were surprised.  It was frustrating because they were simply doing things as they had for years – pretty much business as usual.  This can be a trap for established businesses.  You might think you’re giving your customers what they want, when what they really want to see is change. What used to work well, may not be working well now.  It’s true that you can’t respond to every whim of your clients, but if they believe you aren’t listening they will find someone who will.

“In the middle of every difficulty lies opportunity”  – Albert Einstein

But despite all of the negative feedback, there was good news here, if they could allow themselves to find it.  What were they missing?  They were viewing those comments as something negative rather than positive.  But feedback (good or bad) always has value – you just have to be willing to listen and learn.  In this case, because the comments were not complimentary towards their business, pride was getting in the way.  The established business mantra of “This is the way we have always done it” have been the final last words for more than one once valuable – now bankrupt publicly traded company!  Where would Blockbuster be today if they had aggressively transitioned towards the Netflix model once it was clear the consumers didn’t want to leave their house to get a movie?

“The Pessimist sees the difficulty in every opportunity.

The Optimist sees the opportunity in every difficulty.”  – Winston Churchill

Regardless if you do a face-to-face roundtable with key accounts, poll or survey customers via email, or simply receive unsolicited comments from customers; the suggestions, feedback, and comments need to be processed with an open, positive mind.  You must dump your ego and the “This is the way we have always done it” mentality.

Additionally, don’t adopt selective hearing that’s only focused on customers.  Comments from vendors and employees should be taken seriously too.  Criticism isn’t always easy to accept but there can be a ton of opportunity in the feedback if you process it from an optimistic point of view.  Negative feedback from any source is a gift.  It’s the best way to start finding where the real issues are…if you can open up and listen to it.

How to Find the Good in the Bad….

When it comes to feedback (customer, vendor, employee), business owners often struggle with what’s a legitimate issue. What’s an issue we need to address and what isn’t?  And, in the case of the business owner referenced above where almost all the feedback was negative, where do you start?   Those are all valid questions and the answer is really pretty simple.

What about your business?   How do you respond when you get feedback that isn’t what you wanted to hear?  Do you view it as opportunities for positive change?   Are you willing to own it and be open to the idea that something good could from your bad?    As always, we value your comments in the space below.

2 thoughts on “Can you find the Good in being bad?”