Survey Says? (Why your business should be asking)

Survey Says? (Why your business should be asking) 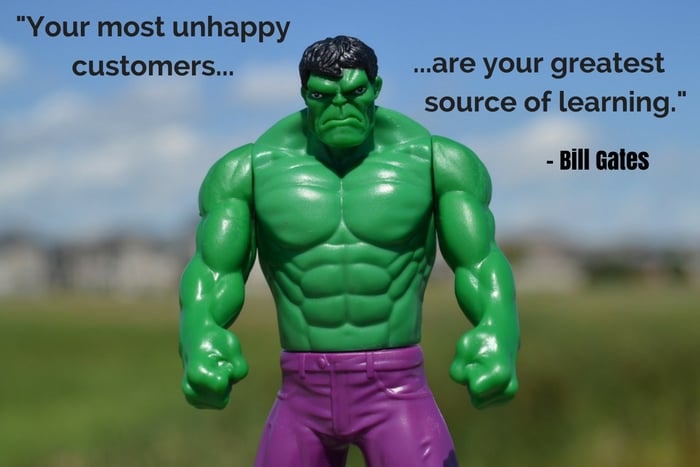 Family Feud is one of the longest running games shows in history.  From its start in 1976 with Richard Dawson as the emcee to current funny man Steve Harvey, fans of the show are entertained (and sometimes shocked!) by what comes out of contestant’s mouths when they are asked to give & match answers to questions that were posed to a group of 100 people surveyed.   Matching answers earn your family points as you advance through rounds until ultimately one family is the winner.

“Survey Says?” are the now familiar words used to reveal how well the contestant’s answers align with those who were surveyed the same question.   What makes the show so comical (in addition to Harvey’s humor) is the variety of answers contestants will give, often on questions that you think would have a limited number of logical answers.

“Survey Says?” and your business…

Surveys may date back hundreds of years, but prior to the 1980s, there was limited focus on customer service and satisfaction in surveys.  Surveys were more front line issues (delivery, quality, function) and less about the customer.  Though progress was made in the last two decades of the 20th century as far as customer’s opinions were concerned, connecting the dots of the positive survey results and tying them to the likelihood of additional sales revenue, growth, and profitability remained elusive.  There simply was no correlation. Customers might respond they were happy with the service at company “A” and buy from a company “B” the next day.

Fred had been tasked with cracking the code to uncover if  there was anything in the data from all these surveys being conducted, that clearly indicated a company was performing in a way that positively impacted their bottom line.  The goal of a great business is to keep growing – but it certainly helps to know what works and what doesn’t.

In 2003 Reichheld published an article in the Harvard Business Review titled “One Number You need to Grow”, sharing publicly what his research team had identified as the one question that more than any other survey question suggested the company was positioning itself for future growth.  The question turned out to be a relatively simple survey question.

“How likely is it that you would recommend our company/product/service to a friend or colleague?”

The answer places each customer’s reply in one of three groups: Detractors (0-6), Passives (7-8), or Promoters (9-10).  Detractors are probably unhappy and likely will not do business with you again unless they have to. Passives are neutral; they may or may not be repeat customers.  And Promoters are loyal happy customers likely to return and will also be telling others about your company!  These were the responses that directly tied back to actual results…and could predict future results.  With this information, Reichheld developed a simple way to track the overall outcome – what he coined the ‘Net Promoter Score’ (NPS).

Theoretically, NPS scores can range from -100  to +100.   Current data across all industries produces average NPS scores between 10-15 and large companies scoring more than 50 are considered “world class”.  A few recognizable companies in this “World Class” category are Apple, Harley Davidson, & Samsung.  And it’s not just a nice story – these numbers have a major impact.  Research has shown the companies with NPS scores over 50 grow at rates significantly higher than companies with average NPS scores.  This isn’t just the occasional company tracking this data – these days most Fortune 500 companies are actively using the NPS score as a key metric, which means that any company with a track record of NPS scores above their industry average or trending upward will be viewed as more valuable businesses.

It is relatively easy to calculate.   A company simply sends out a short survey and includes the NPS question as part of the survey.   Once you receive your responses there will be a percentage in each group.  The formula is simple % Promoters – % Detractors = NPS.   Passives are neutral, so they are not included.

Survey Tools and Getting Your NPS:

Tools to create surveys get your NPS.   There are several great options to help you get your NPS.  Satmetrix-Net Promoter Score, Survey Monkey, and Fluid Survey are a few. Several of these offer free options.  If you’re looking for detailed analytics, specific to an industry or you have a high volume of responses you may need to use one of the paid options.

Creating the ideal survey?  Our suggestion is shorter is better.  Long surveys typically have lower response rates; attention spans continue to shrink so our recommendation is just the NPS question plus no more than 2 or 3 more.   Most importantly include a box for additional comments or feedback.  The information you gather in the comments box will often be the most useful information you’ll receive to grow your NPS score (and improve your business).

Anonymity…By using one of the on-line options suggested above, your customers can maintain their anonymity, they are more likely to be brutally honest with you (good or bad).  Sometimes candid feedback will hurt, but you can handle the truth if you want to get better!

How often should you survey?   Best practices suggest general customer surveys no more than 2X’s per year.   A good time to hold a survey is whenever a significant service or product is delivered.  The bottom line? You don’t want to be annoying.  Put yourself in your customer’s shoes, if it is to the point that the number of surveys would annoy you, it is probably annoying your customer! 🙂

Practicing What We Preach…

After a recent ½ day workshop Aspire Business Development conducted, we used Survey Monkey to get a pulse from our attendees.  The survey was emailed shortly after the workshop was completed. (Another key for higher response rates is timely execution, especially if it is tied to a specific event.)

There were two additional questions about the likelihood of taking the action in their business and the relevancy of the material.

Remember the comments box?  We had a number of helpful comments.  One was a suggestion for name tags, something we had not thought of for this event.   And, something we would not have thought of without the survey.   In fact, one of the best ways to improve your NPS score is to focus on the comments in the feedback box, especially if they come from detractors. Those comments, specifically if you see a trend, can point you towards the fastest route to making your customers happy.

Survey Says?  Surveying your customers may not provide the comic relief that Steve Harvey is able to delivery as the emcee of the Family Feud, but it does give you some great insight about what your business is doing well and where you might have opportunities for improvement.   Hopefully, this will give you the courage to give it a try.

What about your business?  Do you survey your customers?   Have you every calculated your NPS score?  Now that we’ve shared “the one question”, do you recognize it from past surveys you’ve seen?   As always we value your comments in the space below.