Thoughts on 'Solve For Happy'

Thoughts on ‘Solve For Happy’ 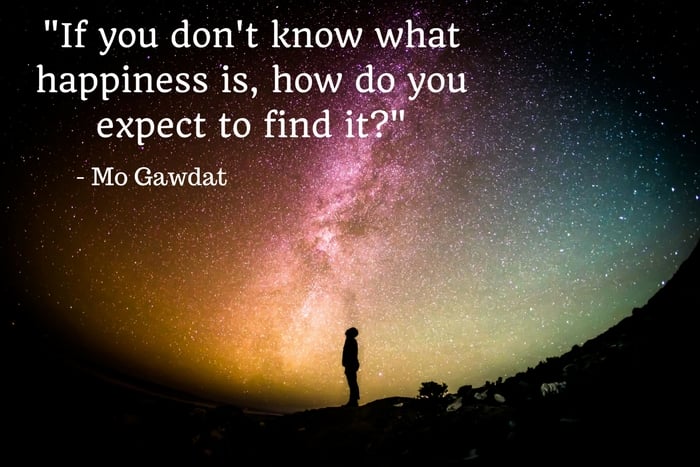 Over the last few years, there’s been a lot of discussion about the concept of Happiness.  From a business perspective, my first exposure to the science behind the study of happiness was in references from Tony Hsieh (CEO of Zappos) in his book Delivering Happiness.  In fact, Tony and his team at Zappos so believe in the importance of this concept that they’ve incorporated the ideas into their culture and ongoing training.

I’m also a huge fan of Shawn Achor’s work – especially his book The Happiness Advantage where he does a fantastic job of explaining how happiness leads to better performance (personally and professionally).  Although it’s a bit counter-intuitive when you dig into the ideas it makes perfect sense that we would (collectively) perform at our best when we’re happy, engaged and focused.

Which brings me to Mo Gawdat’s new book ‘Solve for Happy’.  Mo is the Chief Business Officer for Google [X], the division of Google that works on moonshot ideas (big things that could literally change the world).  He also happens to be a hardcore engineer by training, so his approach to the concept is a bit different than the academics, psychologists or social scientists.  He literally wanted to develop an equation for happiness and identify tangible steps for solving that equation.

Despite having what many would consider a fairytale career, Mo Gawdat has had his fair share of challenges.  He started working on this idea when he realized that chasing (and mostly achieving) money, career success, and expensive toys did nothing to make him happy in the long run. In fact, it did the opposite and left him feeling stressed and depressed.  This was really put into perspective for him when his son died to unexpected medical complications when he was only in his early 20’s.  Dealing with that tragedy prompted Mo to put what he had learned into writing as a way to share his son’s memory and meaning with others.

Despite the crippling grief that most of us can’t imagine, the ideas in ‘Solve for Happy’ have allowed Mo to move forward with his life and continue to be happy and productive.  He believes happiness is a matter of perspective and expectations – which is the essence of the ‘equation’ that he developed. 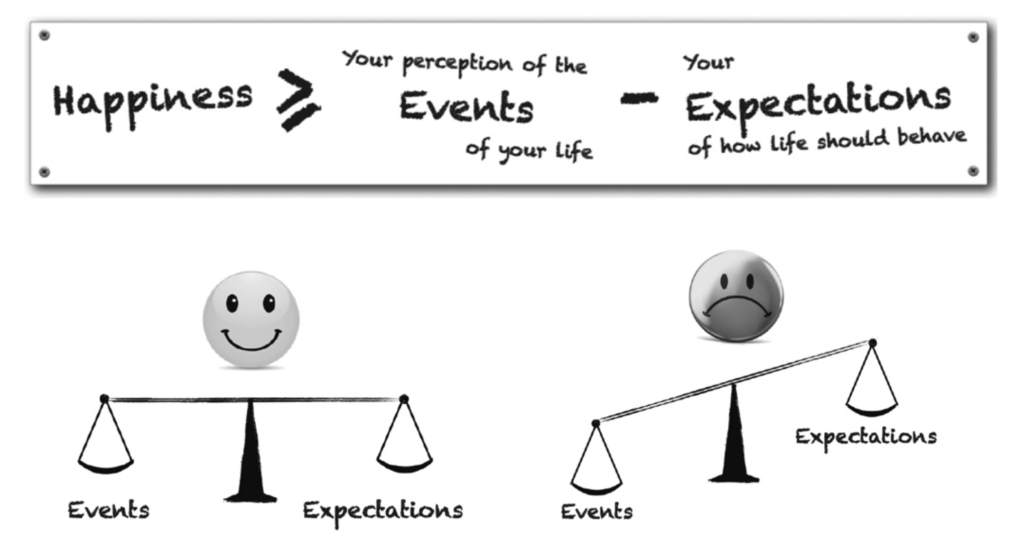 The real key to this concept is that it’s not the events that happen to you that determine your happiness… it’s your PERCEPTION of these events, how you think about them, that makes all the difference.  The author uses the example of how happy he was when his favorite car was totaled.  He was happy because his wife was driving the car at the time and all of the safety equipment worked perfectly and she was able to walk away without a scratch.  If the car had been totaled when it was just parked on the street, it would have devastated him – so context matters… which eventually leads you to the idea that it’s not the event that causes you to be unhappy, it’s your thoughts that are making you unhappy.

It’s a deep concept that might take some time to get your head around, but if you can make the leap that any unhappiness you feel is ultimately due to your thoughts and that your thoughts can be changed (by you), then you’ll start to figure out how to be consistently happy.

Lots of ideas in the book stood out – but here are a couple of the big ideas that really resonated with me:

The State of Escape vs. the State of Happiness.  Most of us at some point in our lives have pursued some kind of escape, especially when we were stressed or unhappy.  The idea of going out to a party, playing intense games, for some – drinking or drugs, all lead to an escape. These activities might be fun and there’s certainly nothing wrong with having fun, but they are transitory and not a state of happiness.  Because of our brain chemistry, we’re wired to chase the high of the escape as a way to blunt any pain (or stress) that we might be feeling – but that doesn’t address the root cause and once the fun is over, we’re right back to where we started.  And the next time you chase that ‘high’ you’ll need more (think adrenaline addiction or a drug addict’s behavior).

Happiness is our default state.  The other big idea that really stayed with me is the idea that we are meant to be naturally happy.  Think about the average young child. When they’re left to their own devices, doing their own thing, they are happy and don’t generally need much from the world.  Inherently we all have that natural ability to be happy, it’s just been drowned out over the years by expectations and perceptions.

The author covers 6 Grand Illusions that hold us back (Thought, Self, Knowledge, Time, Control, Fear), 7 Blind Spots that we need to deal with (Filters, Assumptions, Predictions, Memories, Labels, Emotions, Exaggerations) and 5 Ultimate Truths that we need to hold onto (Now, Change, Love, Death, Design). Some of the ideas are pretty deep and philosophical, some of them are tangible and practical.  They will all make you think and likely give you a new perspective on what it means and what it takes to be Happy.

Have you read Solve for Happy?  What did you think?  We’d love to hear your thoughts in the comments below.