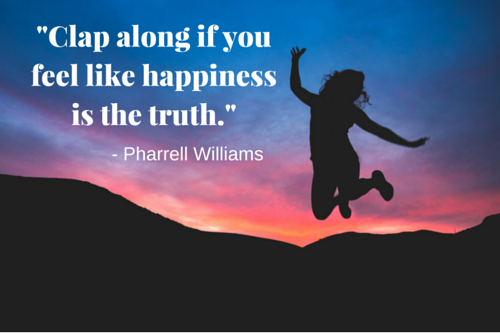 Most of us are looking for a competitive edge when it comes to business.

What would the impact be if you were 10%…20%…even 30% better when it came to crunch time in your business? What kind of impact would it have if you were able to get things done more quickly?  Make fewer errors? Be more creative?

Over the course of a business lifespan…a career…or even just a few years, a small edge can end up making a huge difference.

It turns out that it’s possible for anyone to develop that kind of competitive performance edge – in fact Shawn Achor wrote a book about it called The Happiness Advantage. He’s also created one of the most popular TED talks of all time:

If that video doesn’t work for some reason – you can find his TED Video here: Shawn Achor – Happy Secret to Better Work

The bottom line of his research and the insights from his book…people who are ‘happy’, (those in a generally optimistic, positive state), will significantly outperform someone who is in a neutral or negative state.

Examples of The Happiness Advantage

One really interesting example that he shares is a study done with doctors and the effectiveness of their diagnosis of patient’s symptoms to come up with likely health issues.  Although this might seem fairly rigid, the reality is that it’s an exercise that requires a lot of creativity and flexibility – especially as additional information comes to light which might dramatically change the initial assumptions.  If you’ve ever seen any medical shows on TV, you’ve seen examples of how this idea works (House M.D., Royal Pains, etc.).

In the study, experienced doctors were split into 3 groups. One primed to feel happy, one given neutral medical related studies to read and the control group given nothing. They were then asked to do a series of medical diagnosis. Here’s where it gets interesting. The Happy Doctors were able to reach the correct diagnosis about 2X as fast as the control group and they were about 2.5 times more creative (less anchoring around initial assumptions).

How did they make the doctors happy? They gave them candy right before the tests…

Back in the late 1980’s, MetLife had a huge problem with turnover and performance when it came to their life insurance sales teams. It was a very challenging career (still is) and only about 20% of the salesforce was lasting even 4 years with half of them leaving that first year! After trying lots of things, MetLife finally hired Martin Seligman (now known as the father of Positive Psychology).

It turns out that seemingly small change in mindset has a huge impact. The agents with more optimistic style outsold their negative counterparts by 37% on average – with the most optimistic outselling the most pessimistic by 88%!

Based on that study and a few more to validate, MetLife ended up completely overhauling how they hired – focusing on Optimistic styles as the key driver (they gave it much more weight than industry knowledge). Their turnover plummeted and sales took off.

One decades long study looked at 180 Catholic Nuns, studying their diaries for over 5 decades (starting in the 1930’s). They looked at the positive nature of the entries from when the nuns were in their 20’s to determine which of them had the most and the least positive emotional content at that age.

On average, the ‘positive’ nuns lived 10 years longer than their counterparts – 90% of the most positive quartile were still alive at 85, compared to only 34% of the least happy quartile.

The data is actually surprisingly clear across a lot of different angles. There are clear performance benefits for happy, positive people. What could you do right now to cultivate more happiness for yourself? Or within your environment for your team?  Conversely are there things happening that are stressing people out or making them unhappy?  Maybe you could start by removing some negatives?

What do you think? Does this ring true to you?  Or does it sound like a lot of happy nonsense? We’d love to hear your thoughts – leave us a comment below.