Save the Drama for your Mama...!

Save the Drama for your Mama…! 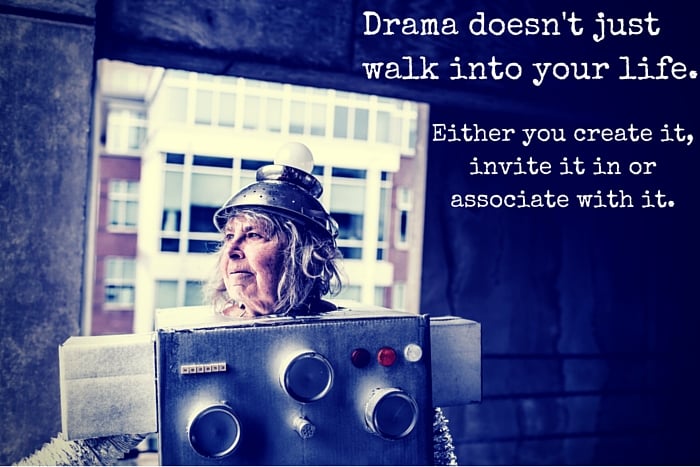 You expect it (and deal with it reluctantly) from your teenager, but it doesn’t have any place at work (it still happens far too frequently).

A client of mine has an employee who thrives on drama.  Arguments, altercations, blame, complaints – anything that will draw attention.

You’ve probably seen the type – they enjoy creating tension and if there’s not already a fire burning in the office, they’ll be glad to start one. And the end result is disruption (at best) and potentially a complete shut down of the team (at worst). They’re exhausting to deal with, difficult to ignore and if you are able to ignore them, they end up inflicting themselves on anyone else who might be nearby…other employees…maybe even clients or vendors.

And it’s not as simple as just getting rid of someone – often these overly dramatic employees add a lot of value when they’re not playing the drama card.  They’re passionate and you’ll see flashes of brilliance from them.  Most days, they seem to ‘get it’ and they’ll generally be good corporate citizens. You might go a week or even a couple of months without a meltdown, but the possibility is always lurking – and the odds are good that you’re going to see it again. And when you do, it’s going to be just as painful as it was the last time.

In my client’s case – the dramatic perpetrator ripped on teammates (in front of clients), sent out a few different messages to the whole team blaming everyone else for the issue and generally caused a lot of disruption.  They calmed down over a weekend and (after some serious discussion with the owner) came back and apologized to the rest of the team and promised to not let it happen again. The apology and promise seem to be sincere – but can you actually count on it?

What do you do with all of that Drama?

There are two approaches you need to have when dealing with drama. From a short term tactical (and practical) perspective you have to deal with the situation. My recommendation would be to go about it the way my client did. They pushed through the immediate issue and made sure that their clients were taken care of. Then once all the immediate fires had been put out, they had a very direct, candid discussion  with all of those involved to find out what happened.  Once it was clear that this was a self-inflicted issue by one employee that blew out of proportion, they let the guilty employee know in no uncertain terms that their behavior was unacceptable and that these issues were THEIR fault – no one else’s. It’s critical to address any sort of victim mentality.

At that point, if the employee had reacted badly, they would have been terminated and although that would have put the rest of the team in a bind, I suspect most of them would have cheered that outcome. Instead the employee reacted in a positive way, apologized and promised not to do it again. In fact they followed up with hand written notes to everyone involved. The end result? They are still employed, but will have reduced responsibility and they are effectively on ‘probation’ for the foreseeable future.

Once you’ve handled the tactical stuff, you need to find some time and look at the big picture.  When things go wildly wrong there’s typically a reason for it. Sometimes it’s as simple as having the wrong employee.  If you have an employee that can’t or won’t control the drama, then they need to go. Make it happen.

Sometimes these kinds of breakdowns are driven by not having enough of or the right infrastructure in place. Are there procedures or systems that are broken – putting too much pressure on individuals when things get crazy?  What could be done to streamline or fix those processes or systems?  Maybe pull together the impacted team as a group and brainstorm ways to fix things.

Do you have the right people in the wrong seats?  You could have a great employee who’s not experienced enough or just not suited to managing people or processes – maybe your employee has too much or the wrong kind of responsibilities and by moving them they’ll be much happier and more effective. When’s the last time you did a complete review of team and their roles and responsibilities?  Do they all ‘get’ what they’re supposed to do?  Do they want to do it?  Are they capable of it?  If there are any question marks on any of those, then you need to dig deeper and make changes.

Finally, you need to look at your company culture and attempt to identify if there’s an element that allows that kind of Drama to be acceptable? Are you enabling victim behaviors? Alternatively, do you collectively stress core values of teamwork or accountability or personal responsibility?  If not, is that something you could start doing?

What about you?  How do you handle drama at work? Are you playing into it or are you taking care of it?  What would you do that’s not suggested here?  I’d love to hear your thoughts.

2 thoughts on “Save the Drama for your Mama…!”