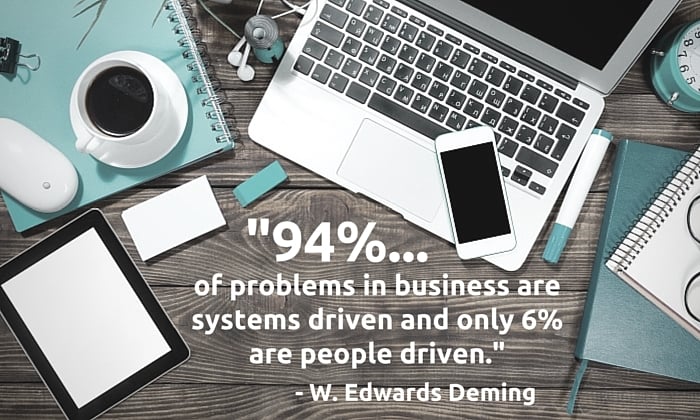 This is a guest post from Stephen Heiner – in addition to living out his dream of being an entrepreneur in Paris, Stephen also has the experience of starting (and selling) multiple businesses here in the US.

Time is the perhaps the most precious commodity for small business owners. There’s that pile somewhere on your actual or virtual desk of stuff you would get to…if only you “had time.” Today we aren’t proposing to solve the problem of time or to clear out that pile for you, but what we can suggest you do is bump something to the very top of your pile, and from there onto your to-do list: systems.

Sure, you may be making money without systems. Maybe you’ve been doing that for years. But that’s only because of other factors, and indeed, in spite of your not having systems. There’s a better, more sustainable way to do things, and having systems in place will eventually give you more time to “get to” that other stuff that will help you grow your business, not just manage what you already have.

For my MBA at Saint Louis University, I was required to complete a capstone project in collaboration with five other MBA candidates. We would work specifically on a project brought to us by a Saint Louis company that had applied for the program. We didn’t have any choice in who our teammates would be or which company we would be assigned to. That was part of the challenge too!

For any number of important reasons I’m going to call this Company, based “in the county,” as they say in Saint Louis, Company X. It worked in the green and sustainability sector and we were really impressed by the charisma of the president and founder in our initial interview. Our assignment, as delineated by him? Develop a coherent social media and marketing program, as well as pinpoint some areas for improvement on the website. Simple enough.

We were excited for the opportunity, and frankly, so were some long-suffering employees, we found out later. But during our first 2-hour interview on site we discovered a shocking state of affairs. Despite having been in business for five years and having done millions of dollars in revenue, the company was completely incoherent and leaderless. Everything they did was one-off, and any systems they did try to implement weren’t enforced. Payroll was sometimes late and morale was fair to low. It wasn’t surprising that turnover was high.

I was a less seasoned entrepreneur then, but I was still an advocate of the “systems” approach taken by Michael Gerber in The E-Myth. Among other things, Gerber recommends that you create job descriptions for every role in your company, even roles that do not exist. For early stage companies, this includes the sometimes 3-4 different job roles one person might be carrying. (I relished adding “Chief Janitor” to my other, more prestigious job titles.) Create systems and expectations so that a sudden illness or absence (or resignation) among your key staff doesn’t cripple the business. You will be surprised by how often neither you nor your staff have thought through how something gets done. It doesn’t need to be as specific as UPS’ famous “key on the pinkie ring finger” system, but specific never hurt anyone! And most importantly, get buy-in from your staff and relentlessly enforce these systems.

Once you’re happy with the flow of things you can codify everything into a manual – and I can tell you, that manual will put a big smile on the face of anyone looking to buy your company. I still remember the smile and added confidence I could see in the buyer of the last company I sold when I handed him what we called our “Blue Book.” Not only did it have Michael’s recommendations that I listed above, but it also had an updated business plan, historical timeline, and comprehensive financials.

And as for Company X? Well, they never came to our final presentation. There we were, all dressed to the nines, with a power point presentation that we had laboriously and thoughtfully crafted, showing him all the ways he could implement a social media and marketing strategy. Even better – all of this consulting had been truly unpaid. To value the talent that surrounded me in that project would be a difficult task, but the presentation Company X failed to show up for was worth at least $5,000 in time and labor. When we called the founder of Company X to ask him where he was, he told us “he had forgotten.” The reality? We had given him a quick briefing on some of the things that needed to be dealt with to successfully implement our plans, and embarrassed at the possible pinpointing of failures in a public forum (albeit, just the team and our capstone professor) was more than he could bear. He didn’t forget. He chose to forget.

Don’t be like him. Choose to do the hard work of creating, refining, and implementing systems. You don’t need to be anywhere close to selling a company to implement systems. You just need to be someone who wants his staff to sleep better at night because they have a map that essentially says, “This is how we do things here.” You would be surprised at how few workplaces bother to do this – and your doing it will make you stand out in a competitive labor market.