We had our ‘regular’ poker game a few nights ago (regular in this case meaning the first one in about 4 months) and had a really good time.  This is not a big money game – for this particular group it’s way more about the competition and just catching up and having a good time.

Generally we play dealer’s choice, which includes the standards like Texas Hold-em, several variations of Seven Card stud and the occasional gimmicky game like 7 – 27, Dimestore or Pass the Trash.

However we’ve found that the favorite game of the night for most of us is a variation of Liar’s Dice. 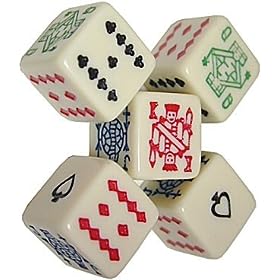 The game we play is pretty close to the ‘Individual Hand’ rules that’s listed under Liar’s Dice in the wikipedia.

The essence of the game is that everyone puts up 3 stacks of chips in front of them and the first player rolls the dice and declares the starting hand (i.e. Pair of Jacks with a Queen) and then hands the covered dice (in the rolling cup) to the player on his left.

That player has the option to agree to the hand, which obligates him to ‘make’ a better hand or to call him out on the declaration.  If you’re called on the declaration and you don’t have a hand at least as good as what you called, you lose a stack of chips.  If you do have at least that hand, the player challenging you loses a stack.  Whoever loses the stack gets to start the next roll.  Once you lose all 3 stacks you’re out and the last 2 players standing split the pot.

If you agree to the hand, then you get to the opportunity to roll none / some / or all of the dice either in the cup or up and then declaring the new better hand than you received.  (i.e. you roll 3 under the cup from the previous example and declare 3 Jacks and a Queen to the next player).

The beauty of the game is the amount of strategy, mis-direction and perception that are required to do well.  It’s often greatly to your benefit to treat your neighbor well and indirectly work with them to set up somebody on the other side of the table.  However to ultimately win you will need to compete with them directly as well, so partnerships can only go so far.

So what lessons does this game have for the business world?  Here’s a few ideas that I came up with:

I’m sure there’s several more – let me know what your insights and lessons are from the games that you play.  I’d love to hear them.

And if you miraculously roll the 2 Jacks with two dice – I’m going to challenge you on it, no matter how often you seem to roll it.