We went downtown on Sunday night to catch the touring edition of Avenue Q.  Side Note – there must be something to this Kansas City downtown revival – there were at least 3 major events going on during a Sunday night and parking was a challenge.  It was great to see that many people out and about and having fun.

Anyway, we were there to see Avenue Q.  It’s a Tony winning Broadway musical that mixes puppets with live action actors…somewhat similar to Sesame Street – for adults! 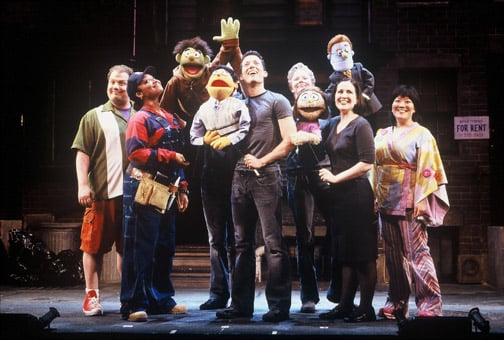 AVENUE Q is the story of Princeton, a bright-eyed college grad who comes to New York City with big dreams and a tiny bank account. He soon discovers that the only neighborhood in his price range is Avenue Q; still, the neighbors seem nice. There’s Brian the out-of-work comedian and his therapist fianceé Christmas Eve; Nicky the good-hearted slacker and his roommate Rod — a Republican investment banker who seems to have some sort of secret; an Internet addict called Trekkie Monster; and a very cute kindergarten teaching assistant named Kate. And would you believe the building’s superintendent is Gary Coleman?!? (Yes, that Gary Coleman.) Together, Princeton and his newfound friends struggle to find jobs, dates, and their ever-elusive purpose in life.

There are a lot of life lessons covered in this fairly short show, here are a few that I thought were especially good!

Great show and I would highly recommend it to anyone that hasn’t seen it.

1 thought on “Lessons from Avenue Q!”