How to NOT market yourself in Social Media

How to NOT market yourself in Social Media 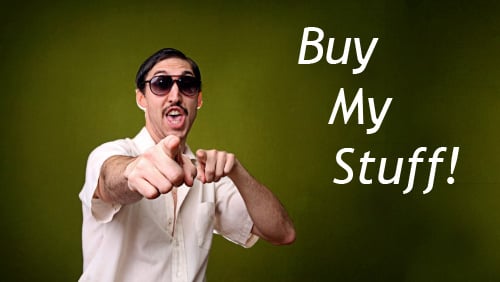 There is a lot of confusion out there on how to use Online Social Networking sites to make money.  Unless you’ve been under a rock, you’ve heard about the huge rise in popularity in social media and the inevitable rise of interest in how it can used to make money…and that’s where the problem comes in.

I had  a great discussion with one of my fellow PBCA coaches on a very specific example she saw in LinkedIn.  She happens to be in a LinkedIn group with a life coach who could use some pointers on online Social Media Marketing.  See below for details.

Example of what not to do:

John is our example here (not his real name) and he’s done several things right on LinkedIn.  On the positive side he:

However, from a straight profile perspective, there are a few things he could improve:

But the reason he’s the bad example in this discussion is that his approach to Social Media Marketing totally violates the basic rule of networking (online or offline).  John’s approach is to post direct questions not just once, but twice to large groups that he belongs to and solicit them for business – here’s the full text of the question posted (with a name change).

Are you now unemployed or retired? Are you thinking about what’s next for your life and/or career? Considering speaking with me, JOHN a Certified Executive & Personal Coach.

Think about the real world equivalent of this approach.  You’re at a Chamber networking function and a guy you don’t know walks up to a group that you’re talking with, asks if anyone there is unemployed or retired or if they are thinking about what’s next and then shoves his card at you.

How would you react in real life?  Most people would politely find a way to ignore the guy and walk away and some poor guy will get stuck talking to him until he can be ‘rescued’ by someone else.  The odd are very high that not only will this guy not get any response, but he will also establish a reputation as ‘that’ guy that people will avoid in the future.

What people don’t understand is that Online Social Networking is very much the same as an offline situation.  If it doesn’t make sense in person, then it probably isn’t a good idea online either.

In fact – checking in with JOHN on his results using this tactic so far…no one has responded to him and he’s wondering what the big deal is with Social Media.

What should you do?

If direct solicitations to a bunch of people that you don’t know and haven’t connected with isn’t effective, then what should you do?

Going back to the comparison of real life offline networking, the first thing to remember is that networking isn’t (and never should be) selling!  Networking is a great marketing strategy and can lead to finding prospects, but the instant you cross the line from networking to trying to sell, you become ‘that’ guy.  The purpose for networking is to connect with people and get to Know, Like and Trust them (and vice versa).  Until that happens, you generally won’t be making any sales.

So how do you connect?  Ask questions that people are interested in.  Answer questions and provide value to people.  Interact and talk about things that aren’t related to business – talk about your kids, their kids, local sports, things of mutual interest.  Develop a relationship over time (likely it will take months).  Find out how you can help the  other person (in some way other than selling them your stuff).  Introduce them to good prospects for them, pass along a referral for what they do, give them resources.  Listen.

It’s a slow process, but it’s been proven to work – not just online in the last couple of years, but that’s how business has been done for hundreds, probably thousands of years.

The important part to remember is that the online component is just a new set of tools that makes it possible to do more of what you should be doing anyway.

I found a great video from Perry Belcher (online Marketing guy) where he does a great job explaining the concept of How to Make Money with Social Media.

See link above if the video doesn’t work.  Do you have any stories or examples of people that are doing it wrong?  How about doing it right?  I’d love to hear them – leave a comment below.

7 thoughts on “How to NOT market yourself in Social Media”