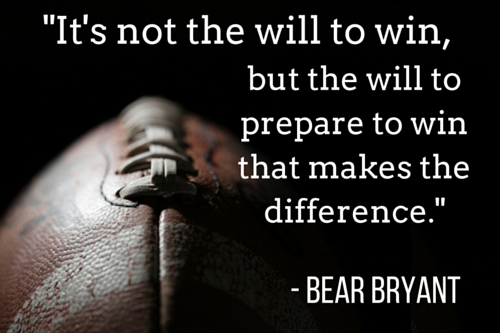 With the Kansas City Chiefs on their historic run of 11 consecutive wins after starting out with only one win and five losses and the Powerball Lottery having its first ever 1 billion dollar plus jackpot, we are hearing a lot of talk about the odds of winning.  However, as a business owner, you make decisions every day that affect your odds of winning (success), it just goes mostly unnoticed.

After week 6 the Kansas City Chiefs were given a 2% chance to make the divisional round of the Playoffs.  A 98% chance they wouldn’t be playing, yet here they are 13 weeks later, heading into the divisional playoff game with their first playoff win since 1993 already in their rear-view mirror.  It’s truly a remarkable turn of events.

How does one turn around a season with 2% chance of succeeding?

Ultimately the answer to that question has many variables that contributed to it.  Not to mention, a little bit of good luck never hurts either!   That said, here are a few observations of steps the Chiefs organization have executed over the course of this season that could easily be applied to your business too.

During the losing streak Head Coach Andy Reid was quick to accept the blame, especially when talking to the media (his customers).  Clearly there were times blame could have been placed on specific individuals or on the offense, defense, or special teams.    That is not to say there weren’t very direct conversations in private with specific personnel regarding mistakes, but what the team experienced as a whole was a leader accepting the responsibility for the loss and it was his responsibility to lead the efforts to correct it.

Andy Reid says his Quarterback Alex Smith has “got the keys to the car.”   Reid has had a reputation of developing quarterbacks throughout his career.   Have you ever thought maybe it is more about developing leaders than developing quarterbacks?    Being a good quarterback in the NFL is not just about natural athletic ability, Smith knows that Reid and the coaching staff trust him,  they have empowered him to make decisions on the field.

Did Alex Smith get the “keys to the car” without instructions?  No.   He gets coaching and assistance along the way.  But he is not micromanaged to the point he doesn’t have the opportunity to make his own decisions and occasional mistakes.    In business, almost every position has some level of responsibility tied to it, whether it means the employee is directly managing other employees or not.   Effective business owners are able to give the “keys to the car” to their managers and let them drive.

3) Don’t underestimate the Power of a Team Building Exercise

On Nov. 1st the Chiefs flew to London to play the Detroit Lions.  The bad news was it meant 9 –  10 hours on a plane.  The good news was it meant about 9 – 10 hours on a plane!  Why?   Once the plane door is closed who you can interact with is limited and you’re in a relatively confined area.  It turned out to be a perfectly timed event to build some camaraderie among an emerging team.    It may not have been planned, but Andy Reid has identified that focused time on the plane as one of the turning points of the season.

The best team building exercises are events away from your business.   With the Chiefs locked on a plane at 30,000’ they were offsite (not at Arrowhead), all the employees (players, coaches, etc.) were there, and they had limited access for any outside interruptions….a great recipe for team building!  Maybe the game in London wasn’t such a bad idea after all?

4) Focus on what you can control

After the decisive win in London, questions starting brewing about strength of schedule, what if this and what if that.  As a fan, it was easy to start looking ahead.   Yes, they had just snapped the 5 game losing streak with two wins but there were still a lot of unanswered questions about the rest of the season and what was in front of them.

One of the things you started hearing repeatedly from the front office on down was we are just “focusing on our next game”.  A message of “we are doing somethings better, but we know we have a lot of room to improve.”  It was a pretty consistent message coming out of One Arrowhead Drive; we will focus on the things we can control.  There are some things that are simply out of your control as a business owner.   Focus on the things you can control and don’t waste precious time on things you can’t.

There is no silver bullet for increasing your chances of winning in business, but there certainly are steps you can take to improve the odds.   These are only a few that I think have served the Chiefs well so far this year.    Maybe some of them can help your business too!  What would make an impact to your business plans?  As always we appreciate any comments in the space below and Go Chiefs!