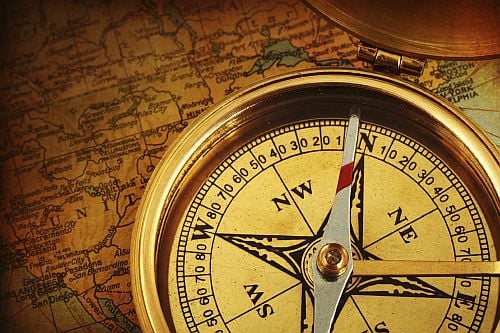 A couple of weeks ago I wrote about the danger of chasing rainbows and the importance of recognizing that your business is a tool to help you get what you want out of life.

I have a couple of different clients that are working on what they really want out of life, who they are, what their core values are.  It can be a very difficult exercise to work through.  However I think the payoff for uncovering your core values and your mission  – all of that hard work is huge!

As I mentioned in the earlier post – one reason why it’s so important is because without a clear idea of where you want to go you have no way of navigating difficult decisions that come up every single day.  As an example, my goal (for now) for my business is to build it up to a certain size and then continue to refine who I work with and how I work with them (quality rather than quantity).

I don’t have a goal of creating a multi million dollar empire – at least right now (not that there’s anything wrong with that).  Therefore I evaluate opportunities and options not on revenue potential, but on how well those opportunities fit with what I’m building.

It all starts at the Core

The other reason why I think it’s critically important for business owners to take the time and really think about who and what their business is all about is because that self-awareness is what really sets great businesses apart from everyone else.

Apple isn’t just a hardware company – they have developed a culture and a following that really came about when they reinvented the company in the 90’s and started to ‘Think Different’.  They make great products, but they also consistently innovate and push the envelope, which their fans love.

Southwest Airlines has consistently defined itself around 2 principles – being the ‘Low Cost Airline’ and having ‘Fun’.  There are several books out that give a behind the scenes view at how those core values drive their strategic decisions (and ultimately led them to the top of their industry).  History has shown that those were smart values to build around – however the bigger benefit is that by really consistently living those values Southwest was able to stand out from the crowd.  People knew who they were, what they were about and what you were going to get when you flew with them…it wasn’t a gimmick and that genuine approach gives them a lot of vocal fans.

Last example – there are dozens of amusement parks in the United States – Kansas City has Worlds of Fun, St. Louis has Six Flags, most major cities have a least one or two ‘theme’ parks of some sort.  However out of all of those parks, the Disney Parks consistently stand head and shoulders above any potential competition overall.  They all mostly have similar rides – they all have bad food, cheap touristy stuff to buy, but Disney creates a memorable experience where most of the others are forgotten by the time you reach the parking lots.

Why is that?  Part of it is the rich intellectual property that Disney has, but mostly it’s the company culture and values that Disney employees live and breathe.  They aren’t just park workers, they are Cast Members that are part of the ‘show’ for the visiting tourists.    To give you a sense of what a big deal this is, I found multiple websites that are strictly devoted to keeping former Cast members in touch with each other and their community – take a look at HasBeens.com and Castmember.com.  I know several people that have worked there, and it wasn’t just a job, it really was a part of their life.

That’s the kind of difference that clear values and a mission can deliver.

What can I do to find my Mission and Core Values?

A great place to start is on the Franklin Covey website – they have a really great tool called the Mission Statement Builder that not only takes you through a guided process and questions on how to develop a personal mission statement, but has some great inspirational resources and examples as well.

Core values are probably best started as a team exercise (or maybe with your Peer Group Advisory Board).  Have everyone on the team come up with 3 words or short phrases that they feel describes the best aspects of your company – sort those all together, discuss them as a group and narrow it down to the top 5 or so and try them out for a while.  It’s an iterative process, but you’ll find yourself resonating and seeing examples of the values that really stand out to you.

Once you’ve got a good starting point, then start actively using your Mission and Values as touch points for decisions and directions.  Use them to evaluate your staff and potential new hires.  Remember that the most successful companies are the ones that can transparently live up to their values.

What have you done to uncover your values (at work or at home)?  I’d love to hear other ideas – share them here.

5 thoughts on “Finding your Mission and Core Values”