Can we go back to the good old days of business?

Can we go back to the good old days of business? 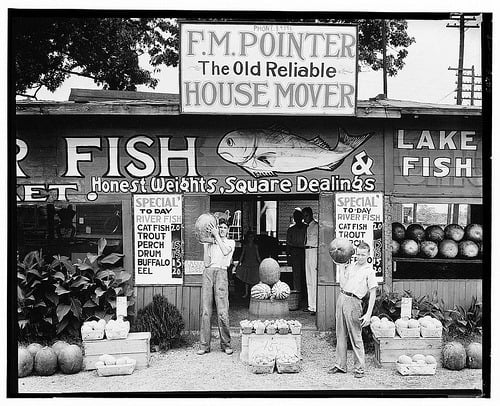 Looking through the lens of nostalgia, business used to be simple.  You could set up a road side stand (or the equivalent) and offer things that people wanted locally.  Your long term success totally depended on your local reputation and at the end of the day it was more about how you interacted with the community and your customers then it was about having some sort of great business model or get rich scheme.

Honest weights, Square Dealings – with the fish specials of the day.  Back in the day, it wasn’t just a numbers game, it wasn’t about having a sophisticated sales and marketing strategy or coming up with a surefire closing technique.  It was about doing the right thing, adding value and helping your customers win (while you win as well).

Somewhere along the way, we lost sight of those values – maybe because slow and steady wasn’t good enough or all of the technology got in the way of good business practices.  However…the good news is that we’re starting to see a return to the good old days – people are using the technology that’s out there to break down the barriers, not create more of them.  Let’s look at few examples:

One of my favorite case studies in Social Media are the guys behind Bacon Salt.  If you’re not familiar with it, it’s salt that makes things taste like Bacon! (brilliant!)

The quick version of their story is that the 2 founders, who worked for a Seattle tech company, were out having some drinks one night and had a classic conversation that probably went something like this (after a couple of beers):

“Me too – I wish I could make everything taste like bacon!”

“Whoa – we should totally make that happen!”

And so the idea behind Bacon Salt was born – however there were the slight obstacles of not actually having the product, not having any experience in the food industry and not really being sure what their target market was or where to find them.

What they did have was technical savvy and creativity.  They started by validating the market, would there be any interest in bacon salt?  To figure that out, they went out to Myspace, which at the time was the largest social media platform (back in 2007) and eventually found 37,000 users who listed Bacon as a primary interest on their profile – they had found their tribe!  They started talking to these bacon lovers, telling them what they were planning…and started receiving orders even before they had a product.

They attribute the success to working with customers as part of a community – engaging with them one on one, the same way your neighborhood stores did a long time ago.  You can see more on their story in this article.

Politics may be the only thing that’s drifted farther away from traditional values than business, but even in the political arena we are seeing the positives that are possible from connecting with people and leveraging online tools to make that happen.

Everyone is familiar with the amazing success that President Obama had using social media in his campaign, so it’s a bit surprising that the latest example of social media success in politics comes from the Republicans and not from the Democrats.

It’s not scientific, but it appears that one of the keys to success for the Massachusetts Senate race earlier this week was the ability to engage people via Social Media.  Sara Paxton from the Evans Media Group wrote a great article the night of the election and laid out the case for why Scott Brown was able to pull off his surprising victory.

Here are the highlights on the Social Media statistics from the race:

Clearly Brown had a lot more traction on Facebook and Youtube and used that visibility to drive his message and establish a relationship via Social Media – ultimately resulting in a come from behind surprise victory that’s shocking the world.

Making the world a smaller place

Teusner wines come from a small winery in the Barossa Valley in South Australia (beautiful area if you ever get a chance to go).  There are only 3 people on staff, so there’s not a lot of opportunities to spread the word 1 on 1, especially internationally.

However they have figured out how to reach the world via Twitter (you can find them @Teusnerwine).  They’ve only been active on Twitter for about a year, but they see increased interest in visits to the winery and people asking where they can find the wine in their local areas.

Just like the ‘good old days’, it’s not about selling, it’s about educating people, getting feedback and building up honest relationships.

Inherently people want to know the companies and providers they do business with.  We’ve seen big box stores come (and some go) and they clearly have the advantage when it come to pricing, but do small businesses that have survived this long have an advantage over the big corporate players because of old fashioned values?  Are they more willing and able to create relationships with their customer base?

What do you think?  Do you believe that buyers will pay a small premium for things like quality service, a real relationship with a real person, personality and the chance to engage in a meaningful discussion?

Share your thoughts below, I’d love to hear them.

7 thoughts on “Can we go back to the good old days of business?”