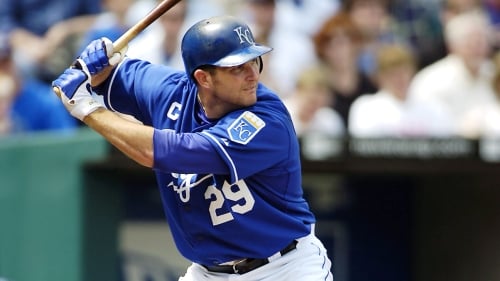 On Saturday Aug. 15th, 2015 Mike Sweeney became only the 29th Royal to be inducted into the Royals Hall of Fame.     In an era where we often are challenged to find professional athletes who qualify as role models, Sweeney has always left no hesitation (well, there was that “one time in 2001”….but more on that later☺).   In retrospect of this special honor, there are many business (and life) lessons one could take from Sweeney’s career, here are some that came to mind during his recent induction ceremony.

Be ready when opportunity presents itself

Mike was recruited as a catcher in 1991.   In 1995 he made his debut in the majors and spent the next few years playing sparely, never over 100 games in a season.   By 1999, just prior to spring training he was actually told by a coach that he had zero percent chance of making the team, essentially his career as a Royal was over.  Through a series of unlikely events he was basically forced to play 1st base after a rare open tryout (it was him and one other player).  Mike seized the opportunity and chose to do whatever he could to help the team.  He was all in.  His desire to embrace that position on the field in addition to his strong bat made him become one of the most respected players (and feared batters) in the sport.  How different may his career have played out, if he only viewed the need to play 1st base as a temporary role?

Don’t run your business with blinders on, remember to look up and be open to trying something different if the opportunity presents itself.

Have some heroes & mentors

Mike speaks of his father often and how he has always been his hero.   His dad was a excellent baseball player too, but he played in a time when league contracts didn’t always put food on the table, so he left the game early to provide a living for his young family.   Mike has never forgot that sacrifice and he is quick to share his accolades with his father and let him know how much he means to him, how much he appreciates all that he taught him both on and off the field.  Today as his father battles cancer that hero is standing taller than ever.  Mike is also quick to acknowledge the many peers, mentors, and coaches he has had along the way, many of them were there to share in his induction ceremony.

Surround yourself with peers and mentors who make you better. If you have peers, mentors, or heroes (past or present) make sure you let them know you appreciate their advice and guidance.

Don’t be afraid to expose a weakness in your competitor

In 2002 Mike Sweeney did something that hadn’t been successfully executed by a Royal in 24 yrs.  He stole home base, not because he was fast, but because he saw a weakness in his competitor and decided to capitalize on it.   Sweeney noticed that Yankees pitcher Andy Pettitte was taking a deep breath and then appeared to be closing his eyes for a moment before each pitch.   Mike sent a sign to his coach and the next pitch he took off for home just as Pettitte went into his routine, by the time Pettitte could respond it was too late Sweeney would score.  Sweeney had identified a weakness and it turned into a score for the Royals.

If you have a product or service that is superior to your competition don’t be afraid to leverage it. It is competition that makes us all better.

About that “one time in 2001” …the Royals were in the middle of another trying season and by now Mike Sweeney had earned the reputation of being a nice guy in baseball.  Some thought almost too nice, maybe even soft.   Jeff Weaver was pitching for the Detroit Tigers and things were already heated due to a previous exchange a couple days earlier.   As the story goes, Sweeney requested the umpire to have Weaver move his rosin bag away from the mound as it was distracting him.  Weaver responded with some expletives that are not printed in Webster and Mike charged the mound.  Some compared it to Bruce Banner becoming the Incredible Hulk.   It netted Mike a 10 game suspension, but his point was made he would not be walked on by his peers.   This is not suggesting you go out and pummel someone who has wronged you but it is OK to stand up for yourself when the situation calls for it.

As a side note….years later Mike called Jeff Weaver just before Christmas and apologized for the incident.  Mike said it was his 2 year old son that gave him the courage and motivation to do it.  He realized his young son would one day see the video and hear the story and he wanted to make sure he also knew he’d corrected his mistake.

Know what you and company stand for and don’t be afraid to let others know.

Have a value system and live by it

You can’t talk about Mike Sweeney without referencing is strong Christian faith. He is a devout Catholic and has referenced it throughout his career as the glue that has bound together his family, his baseball career, his work off the field, and now working in the Royals operations.

Mike leads by example in all that he does; his work ethic both on and off the baseball field, his positive attitude and his eternal optimism are all part of who he is.  You repeatedly hear his former teammates and coaches say that if you think Mike was great on the field, he is even a better person off the field.  There are no smoke screens for the public.  Think about it this way; what would your peers say about you if you were being recognized as a Business Owner or Business Leader “Hall of Fame” member?  What would your employees say?  What about your friends and family?  Would they all say the same thing?

Though he readily admits he has made his share of mistakes, Mike’s value system is rooted deeply in his Christian faith and he has lived it both on and off the baseball field.

If you want your business to succeed long term you and your company need to consistently operate under a value system.

If you didn’t happen to be one of the 39,251 who attended the Royals 9-4 victory on Aug. 15, 2015; the night 5 Time All-Star, Mike Sweeney was inducted into the Royals Hall of Fame, you can watch the ceremony in its entirety at this link Mike Sweeney Hall of Fame Induction.  Congratulations to Mike Sweeney.  It truly was a great day to be a Royal!

What do you think?  If you were following the events leading up to Sweeney’s induction, did you have any thoughts or memories that stood out to you?  Any business or life lessons that spoke to you?   As always we value any comments you have; please feel free to leave them in the space below.