Business from a bug’s perspective…

Business from a bug’s perspective… 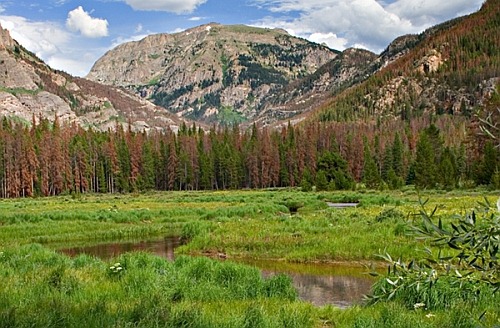 Chris is spending a couple of weeks with family in Montana – which inspired this week’s blog post.

In a bug’s world, the Pine Bark Beetle may be considered a larger insect. But when you compare them to the great pine tree forests out west, at best, they are minuscule in size. Considering the size difference, it is almost unbelievable to see the paths of destruction they are tracking across entire mountain sides as they bore their buckshot holes of death.

This past week we cleaned up the remains of an 85 year old pine tree that had stood nearly 100’ feet tall before losing its battle with the little beetle adversaries. This was just one tree; there are millions more just like it. For the property and home owners in these infected areas you simply try to protect what is realistically manageable.  There are some treatment methods, but they are difficult and can be expensive. Any trees that fall victim to the beetles eventually have to be removed, especially if they are near buildings, homes, or populated areas. The risk of falling dead branches or entire trees coupled with the increased risk of fire from dry dead wood is something that can’t be left to chance.

It truly is a sad situation.  It’s a natural cycle that occurs over generations…but there is some evidence that this outbreak maybe much more severe than those in the past.

All in all it makes for an interesting analogy to the current business environment.  As a business owner what can we take from this story of the Pine Bark Beetle? Clearly the loss of forests is a tragedy in the short term (by geological standards).  However on the positive side, this kind of purging of old forests clears the way for new growth and new opportunities.

One way to look at it would to be think of the Pine Bark Beetles as millions of small business owners (micro-brewery, local deli, local fitness center) spread across the country and the Pine Trees as their large business Corporate counterparts (Anheuser-Busch, McDonalds, Gold’s Gym).  Despite their large size and extensive history, the existing trees are struggling and failing under the pressure from these beetle.  The clear message is that even as a small player you can compete. There is room in the forest for you to have success.

Let’s take this analogy a step further – it isn’t the hole the Pine Bark Beetle (small business owner) bores that kills the tree. It is what the larvae the beetles leave behind (Customer Service, The Experience, The Feeling, The Quality) that disrupts the flow of nutrients and water up to the needles and down to the roots. In fact, the actual holes that are visible are relatively small, but its effect on the tree is catastrophic.

Jumping free of the analogy – large corporate businesses who aren’t adapting to a new way of doing business are at risking of losing out to smaller, more creative, more personable competitors…despite massive size and resource advantages.

In the last couple weeks a large outdoor sports chain announced it was opening its first store in the Kansas City area and another home and garden chain announced it was expanding into southern Johnson County. The challenge for you as a local business owner is to react with a strategic plan, bore in like the Pine Bark Beetle and make sure you are creating a difference that will attract your customers. Consider taking some ideas from a local business that’s achieved some pretty high marks for success – including Small Business of the Year.

What are some things you can do to compete against those huge players?

1 thought on “Business from a bug’s perspective…”