Book Review – Made To Stick

Book Review – Made To Stick 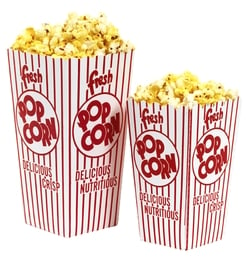 Back in the early 90’s the Center for Science in the Public Interest (CSPI) had a difficult problem to solve.  Their goal as an organization was to improve quality of life by communicating proven problems.

One of the problems they discovered was that movie popcorn, although a tasty treat, was bad for you.

Really, really bad. (like 80 grams of saturated fat for a large serving bad!)

However they quickly figured out that just telling people that popcorn was bad didn’t really make much of a splash – in fact it didn’t even make a ripple.

Then they decided they needed to get creative to get the point across.

They called a press conference and presented a large box of popcorn on a table.  Then they added a plate of bacon and eggs to the table.

Then a Big Mac and Fries.

Then a steak dinner.  The popcorn had more fat than all of that other food…COMBINED!!!

As they say – and as you might remember, the rest is history.  The media jumped all over the story and within a few weeks national Movie Chains started changing the way they made the popcorn – they got rid of the coconut oil and came out with healthier alternatives.

The CSPI had made their idea sticky – not only did people get it, they passed it along to friends (and they told two friends and so on and so on).

That’s the essence behind the book Made to Stick by Chip Heath and Dan Heath.  They analyzed what made some ideas ‘work’ and others just pass by the wayside and developed a set of rules that anyone can use to make their own ideas ‘stickier’.

All in all, this is one of the best books I’ve read in a long time (business or otherwise).  The authors are consistently using great examples to make their point (not surprising considering that concrete examples are one of the 6 rules to make things sticky).

However they go beyond just sharing the examples, they have at least 1 case study per chapter that breaks down the details between an effective and ineffective message to help prove their point.

The other thing I really liked was the overall style and tone of the book – far from being a dry textbook or detailed how to book, there are a lot of genuinely funny anecdotes and points that make the book really move along.

You definitely need to read the book to really get the points, but at a high level there are six key qualities shared by ideas that are Made to Stick:

Using these qualities, you can see why ideas like the urban myth about Kidney Harvesting, or how Jared lost weight at Subway, or how Nordstrom’s communicates the idea of customer service.

If you’ve got ideas you need to communicate (and really who doesn’t) then I would strongly recommend Made To Stick – it’s an enjoyable read with lots of practical, tangible ideas.

Have you read the book?  Share your thoughts in the comments.

6 thoughts on “Book Review – Made To Stick”