Are you using a talking pad to sell your ideas?

Are you using a talking pad to sell your ideas? 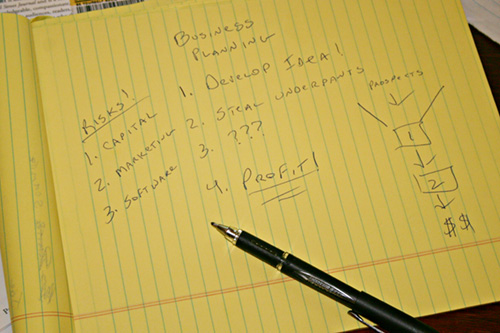 A couple of weeks ago Seth Godin blogged about The Talking Pad (and the following post was a variation called the modern talking pad).  The concept is when you’re talking with someone either 1 on 1 or in a small group, instead of using a powerpoint presentation, you should walk them through the discussion with a simple piece of paper that you can write on in front of them.

The alternative is to use a thick pen or marker and a legal pad.

Whenever you mention a number or make an assertion or promise, write it down. The act of writing is a verb, it’s the process of putting it on the page that underlines what you’ve said, that highlights the moment.

Seth’s point is that the talking pad can help you control the discussion and can add credibility, but I think there are a couple of other really strong reasons to use it.

Anytime you’re meeting with someone, it should be productive for both of you and a big part of being productive is actively listening to the other person.

Improving how you sell

What they care about is that you understand their problem, their situation and that you might be able to help them.  (It’s about them…not about you!).

By using a talking pad and going through a real-life scenario with your prospect, you have to listen first.  You need them to go into the details of what problem they’re struggling with and that will drive how you can prototype the solution on paper – with them, real-time, together solving the problem.

If the end result doesn’t make sense on paper, then you shouldn’t be doing business anyway.  (likely saving both of you a lot of time in the long run).

A talking pad approach will drive you to interact with your prospect, asking questions and figuring out implications, which is the best way to sell anyway.

Building ownership of the solution together

The example that Seth uses in his blog post is great, calculating total cost versus total estimated save – certainly if you can clearly save someone money, then doing the math and clearly illustrating that point is almost sure to close the sale.

What I really like about the example is the need to ask the prospect for an estimate of what they think they’ll save.  This process builds ownership into the end result and it pushes the discussion into a joint problem solving session – which is so much better than just a sales pitch!

In a lot of situations, the math may not be that clear – let’s say you have a service that’s intended to make the business run more efficiently overall, but it’s difficult to tie back to any given number.  In that case you could play the what-if game (using their numbers) and ask them what the math would look like if they could be 5% more efficient on the top line (Revenue) or maybe the bottom line (profit).  That should be enough to get the ball rolling for a discussion.

A successful sales meeting is one where you work with your prospects on a peer to peer level and together you agree on the best way to solve problems.

How do you conduct your sales sessions?  Could you use a talking pad approach with your prospects?  Share your thoughts – I’d love to hear some other ideas.

1 thought on “Are you using a talking pad to sell your ideas?”