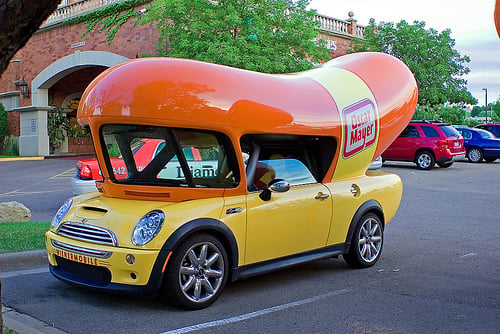 I hate car shopping – it’s not quite as bad as a root canal or re-grouting tile, but I certainly wouldn’t call it fun. For starters, you’re looking at buying a hugely expensive piece of equipment that loses 25% of it’s value as soon as you drive it off the lot. On top of that, you generally have to run the gauntlet of stereotypically bad sales techniques (and salespeople).

However at some point you’re going to need a different vehicle, so we decided to bit the bullet.  The car industry is in bad shape right now, so you would think that they would be pulling out all the stops to make a sale.  I was interested to see if the buying process had improved since the last time I had been car shopping.

We set out to visit 3 car dealers for test drives and found 3 very different situations:  Read on to see what happened last weekend! (how’s that for a tease?)

The car we’re looking to buy is a smaller size cross-over SUV. We’ve done the homework, researched what was out there on the internet and narrowed it down to 3 choices. The next step was to actually drive the choices, get some more information and see if any of the options would work for us.

We had a fairly short window to test drive our 3 choices before baseball practice on Saturday afternoon, so we loaded up the car and headed out.

Our first stop was a fairly new dealership that wasn’t very crowded – which was why the sales team was hovering outside, waiting to pounce on anyone that drove up.

We explained the situation and with surprisingly little discussion, we were setup with a test drive. The vehicle was good quality, the kids loved it and overall it got good marks. From a sales perspective, our salesman was very low key (which was what we wanted) and the only thing that struck me as a potential miss was a lack of any questions on what we were looking for.

We got in, took a test drive and got out in less than a ½ hour. We did end up ‘meeting’ the sales manager, but it was also fairly low key and mostly an opportunity to let us know that they would do what ever they could to earn our business.

Overall it was a pretty good sales experience.

The second stop went down hill pretty quickly. It was also fairly quiet at the dealership and once we explained what we wanted to do, the salesman promptly went into full on sales mode. He made sure that he explained every feature, in great detail, whether we were interested or not. To top it off, their policy was to have the salesman ride in the car – allowing him to continue the feature review during the entire test drive.  The kids were less than thrilled to share the backseat and they had a hard time separating the car from the salesman.  We had to explain that we were interested in the car and that the salesman didn’t come as part of the package!

During a 25 minute discussion, he didn’t ask any questions on what might be important to us, what we were looking for and he clearly didn’t recognize that he was digging a hole that was going to be difficult to get out of.

We also met the manager here, but he clearly wasn’t interested in us and was checking a box to say that we had met.  Despite the ongoing sales pitch, the whole thing moved fairly quickly and we were out in 45 minutes or so.

Overall the experience was okay – unfortunately it’s about what we expected when we started out for the day, reinforcing the idea that we wanted to talk as little as possible to the salesman going forward.

The last stop started out alright – the salesman came off as friendly and a little scatter brained, but happy to help us out. It took him quite a while to figure out where the keys and tags for the vehicle we wanted to drive were, and during this time he offered to do a ‘quick’ 5 minute appraisal of our car (that we’ll be trading in) so that we’d have an idea what it might be worth. That made sense, so we left him our key and went on the test drive (he asked if we wanted him to ride along, but didn’t push it when we said we were okay).

We finished the test drive and a bit to our surprise, our car was gone from where we had parked and there was no sign of our salesman…! We waited for several minutes and he finally came in from the back, explaining that they would really like to keep our car overnight so they could do a full appraisal on it – of course we were welcome to keep the car we had driven through the weekend so we could really appreciate what a great deal it was.

Clearly we had fallen for a classic sales trick (note- don’t give up your keys until they’ve purchased your car!). What was really surprising was that he didn’t want to take no for an answer – it took another 5 minutes of discussion before he gave us our keys back, then he had to walk us back to the farthest part of their lot before we could get our car back!

By that point, we were running late for baseball practice and it wouldn’t have mattered if we liked that car, we wouldn’t have been buying from that dealership.

Car sales are a tough gig – there’s a lot of competition and through decades of bad experiences, car buyers have been trained to watch out for all manner of selling tricks, which makes them very difficult to legitimately engage.

However, on the positive side, if someone shows up at your car lot on  a nice afternoon with their kids in tow, they are interested in your product and all you need to do is figure out how to help them complete the purchase (i.e not sell them).

Think about this for most business owners (especially business to business sales) – your target customer comes to your office, tells you what they’re interested and self selects as someone that wants your kind of product or service.  For most business owners, that would be a dream come true – your marketing worked, you have an interested prospect and all you have to do is provide the sales experience the visitors are looking for.

In our case, we’ve bought several cars before, we clearly had done research and knew what we wanted to see and we didn’t need or want any additional ‘help’!

People like to buy, but they hate to be sold (and they hate it even more when you attempt to hijack their car under false pretenses).  Why is it that so few car dealerships understand this simple idea?

3 thoughts on “Adventures in Car Shopping – how not to sell!”