5 tools that go beyond the pen and paper approach

5 tools that go beyond the pen and paper approach 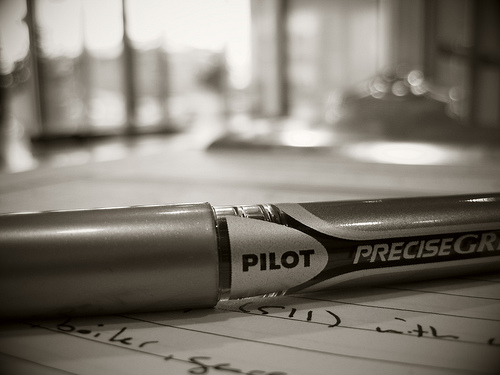 The ability to have a strong handle on what needs to be done, when it needs to be done and who’s going to do it is often the difference between success and frustration.  I know lots of talented, fun and overall really nice people who are…for lack of a better word…unreliable.  They mean well, but their follow-through, their ability to consistently get things done just isn’t there.

The thing about Personal Effectiveness is that it’s personal.  What works for me likely won’t work for you, at least not without some tweaking and vice versa.  Most people have some kind of system / process or tools to stay on top of things – it could be an elaborate system like Getting Things Done or as simple as as a stack of post-it notes.

Whatever you use, there’s some element that involves keeping a list of things that need to be done – pen and paper are great for a to-do list (and can be invaluable for thinking out loud) but here are some other interesting online tools worth looking into.

Seth Godin mentioned Tuexdeux in a recent blog post as a free super simple tool, and that’s exactly what it is and all it wants to be.  It’s online, you pick the day that you want to do what ever you need to do and then you check it off once it’s done.

No muss, no fuss – it looks very clean and efficient.

The developers at 37Signals have created their own version of a simple to-do list tool that they call Ta-Da Lists, a spinoff from their Basecamp product.  It’s free and easy to use.  I like the ability to create different kinds of lists – however they aren’t date driven, so it’s a different approach than Teuxdeux.

A great idea by 37Signals to act as a lead into their other products (and still add value).

Different people need different things and there are a lot of people that really want to break things down into details (or they’re working on more complicated stuff).  If the simple approach doesn’t work for you, then something like Toodledo might be more what you’re looking for.  Not only does it support collaboration, but there are also lots of ways to organize your tasks, prioritize and even track your time.

A much more powerful approach than just lists, but may be overkill for some.

Checkvist is all about collaboration and support a teamwork environment.  There are tools to help you organize for the team, brainstorm additions and communicate what’s being done (or still needs to be done).

Lots of opportunities for supporting a team environment.

I have a client that’s using Remember the Milk – not only as a way to keep track of things he needs done, but also as a way to manage the workflow for the new employee that he brought on.  It’s an impressive tool overall, but what’s amazing is all of the support and interfacing they’ve built into it.  There’s a RTM app for the iPhone, and also for the new Android Google phones (which are really cool by the way) and support for all sorts of other online integration.

It’s not really geared for a team, but for an individual or small group that’s looking for a lot of flexibility, RTM is probably the app to check out first.

I’m planning on using some more automation and tools in 2010 – are you currently using any of these tools (or anything along the same lines)?  What’s worked for you?  Share your thoughts below in the comments, I’d love to hear you what you think.