3 Lessons in Perseverance from My Daughter

3 Lessons in Perseverance from My Daughter 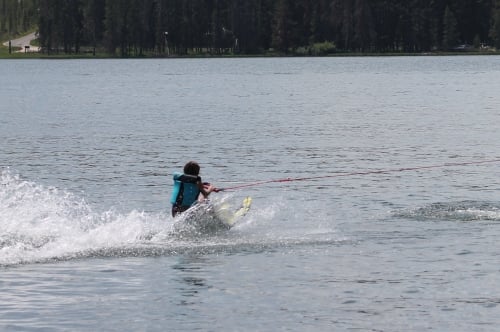 The most memorable lessons in perseverance and persistence are not stories from history books but from the events that play out in our lives.   I got a great reminder of that on July 13, 2014.

At 6,500’ elevation, the lake water in Montana rarely gets above 70 degrees on the surface.   On this mid-July Sunday, the air temperatures had climbed into the low 80’s but the lake water was still in the upper 60’s.   We were spending time with some family and enjoying an afternoon on the lake about an hour north of Butte, MT.  The biggest activity on the water was getting your turn on a Jet Ski, which is always a great time.    Except for the kids playing in the warmer water along the shore most of us were dry.

A few hours into our day two of my brother-in-laws decided they wanted to show off their skiing abilities.  Both of them are natives of the Big Sky Country, so honestly they are more accustomed to the colder water temperatures of a high elevation lake.   The two of them proceeded to take their turns putting on a show carving back and forth on the water.    After they had worn out their legs the unavoidable “OK, Who’s Next?” question was tossed out to the group.

Unexpectedly and without much hesitation, my daughter who is just shy of her 12th birthday announces she wants to give it a try.   I think her Dad was surprised as much as anyone!  So in a matter of minutes one of her uncles was fitting her into a set of skis and she was getting ready to put all her effort into marking another item off the bucket list of her life.

My daughter is small for her age and the skis were for an adult so she was having a rough time holding the tips up, but her patient uncle was giving her words of encouragement and she was doing her best to follow his advice.   In a couple minutes the rope was snug and she was ready to go.

In business we often witness businesses holding on to something that simply isn’t working.  A program, a product, an employee,  a bad customer.   Sound familiar?  They don’t really know why when you ask them what they’re doing…they just won’t let go.   For my daughter she learned that lesson on her first attempt.  When the roped tightened, her weight over shifted forward and she was pulled out of the skis.  And as first timers often do she kept a firm grip on the rope and was plowing the water with her body for a brief second or two before letting go.

A little startled from the jolt and with the realization the water away from the shore is lot colder, her uncle turned coach proceeded to give her a few more pointers on where to keep her weight, how to hold the skis and her arms and so on.   Back along the shore we were yelling out of words of encouragement and her determination was building.  On the second attempt, she again lost her balance and the orange skier down flag went up.  But, there was progress and Lesson #1 was definitely mastered, she knew when to let go. 🙂

By this time the cameras were rolling and a fan base along the shore had grown to include a larger group – more than just friends and family.   You could sense if she tried it again, she just might pop up out of the water. When the skis had been reattached to her feet, her ski instructor uncle gave her some additional words of encouragement and she was once again ready to give it a try.   This time the rope tightened, the tips stayed up, and within a second or two she was officially water skiing!   The shore erupted in celebration and my daughter, Macy had taken her maiden voyage on a pair a skis.

With a solid initial run in the bag, the adrenaline rush started to wear off, and she realized the water wasn’t getting any warmer the further out they went from the shore.  So for this day, her water skiing was over.   But she had done it.   And although, the length of time and style points may have been more in line with the Wright Brothers first airplane flight, she was now a water skier and I was one proud dad!  Way to go Macy!  Persistence does pay off!

If you have times in your life where persistence has paid off we would love to hear about them.   Also, we hope this reminds you to step away from your work a little bit this summer and recharge your batteries with some time with family and friends.

1 thought on “3 Lessons in Perseverance from My Daughter”