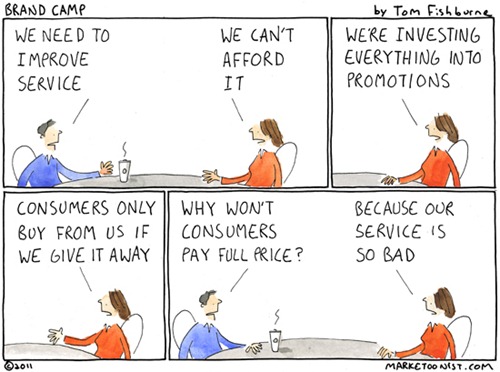 If you have been following the news lately, Verizon recently made an announcement that sent many of their loyal customers into a frenzy, ready to jump ship for another wireless plan. They have clarified and retracted the announcement, but that misstep created a windfall for their competitors. As it unfolded I am sure senior management was left asking themselves how could something like this happen? Why? Why? Why?

The really contentious stuff seems to always fall in around money – for Verizon it was a change in how they plan to bill their customers and charge for data being downloaded. In the summer of 2011, Netflix announced a change in the way they were billing their clients and it nearly sank the company (regardless of the intention, most customers viewed it as a 50% plus increase in their service costs). At the time, Netflix stock was trading near $300/share, by the time their CEO publicly apologized a few months later it was about 50% of that. One year later, the stock value is over 75% lower than the value prior to the announcement. Ouch!

So how does all this play into your business? You may not be a publicly traded business, but many of the challenges you face are more similar than you might think. At the end of the day you are faced with making decisions about pricing for a product or service and why (or why not) the profit margins are where you need them to be. Is the product even profitable at all? If not, why isn’t it profitable? Has demand for one of your products dropped recently? If so, why did it drop? What changed?

Often in business we get our tunnel vision blinders on and don’t take enough time to look at the whole picture and understand what is really going on. We start treating the symptom instead of the cause; the true root of the problem.  We don’t ask why things are the way they are.

Here’s an example – Honda has a clever commercial showing a competitor selling a longer standard warranty on their car compared to Honda’s. The message is about reliability, and the Honda is telling you the competitor’s car needs a longer warranty…because it’s not a Honda the implication is that it’s going to break down and when (not if) it does, you are going to need that warranty. The competitor is treating the symptom with a longer warranty. But Honda is saying the real issue, the core benefit of Honda is about the quality and reliability of the product.

The challenge to you is to pick out an area of your business where something has changed in the last 6 months. What are some new problems you might be having?  What might be unexpectedly going well?  Are there changes in the profit margins of a specific product?  More (or less) leads in a territory?  Productivity of a line better or worse?

Find something that’s changed and take your blinders off and look at all the variables that could have contributed to that change.  Are you clear on the root cause or are you just looking at a symptom?  Why? Why? Why? Ask why about 4 or 5 more times than you normally do. Work with your team and get them to start asking Why as well.  Make sure your efforts to correct it are going towards root cause and not a symptom.

If you have any short success stories from this exercise, we would love to hear about them. You may find the results fascinating!