What Your Business Needs to Learn from Switzerland

What Your Business Needs to Learn from Switzerland 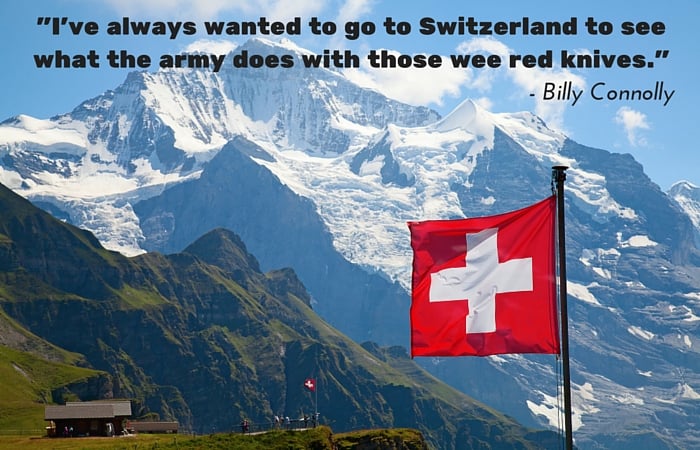 Sure they are known for their watches, chocolate, & great snow skiing, but Switzerland’s position of neutrality during war may be what they are most famous (some view as infamous) for.  The last time Switzerland was at war was 1505.  They managed to stay neutral during WWI and WWII.  They didn’t join the United Nations until 2002 and that took at referendum from the entire country and even then only 55% were in favor.

It is clear they are proud of their history of not choosing sides or placing too much allegiance with any one country. They strongly value their independence.  They often poke fun at themselves on this subject of neutrality but there’s a lot of pride there as well – as there should be.  Neutrality and independence has served their country’s economy pretty well, providing them a historical track record of having one of the best economies in the world.

In business, you often see the opposite of the idea of neutrality and independence.  And, there are three key areas where we see it most.

There are three key areas every business should be aware of regarding excessive reliance or dependency; those areas are Employees, Customers,  and Suppliers.    Some companies may argue that by design they are unable to limit dependency in one of all of these areas, but they are also accepting that “by design” they are operating with a business model that is considered much riskier and potentially more volatile than a more diversified counterpart.  And that risk has a significant impact on the value of the business and potentially even the operational viability.

Employees.    This one is hard to escape when the business is smaller – you’re going to rely on some of those initial employees a lot. But the sooner you can start documenting what your employees do and how they do it the better off you’ll be.

When an employee points to his head when asked where the information is stored, it is not a great sign.   Start cross-training programs as soon as possible.  Even when cross training isn’t an option, documenting procedures should be. Forward thinking employees understand that for them to advance and their opportunities to grow, they need to be sharing information not hiding it from others.  This isn’t just an issue with small businesses a handful of employees, we see this unnecessary exposure in mid-sized companies too.  Don’t allow yourself to be too dependent on one or two key employees, including you!

Q: If you lost your most important employee tomorrow, how would that impact your business?

Customers.   Many new businesses get their start from a small handful of customers.   Often one of their first accounts is someone they were already familiar with.   But as you grow, it is important to intentionally reduce your dependency on any one client.  Don’t misunderstand this, as key accounts are very important, but if 50% of your business is coming from one “key account” you are setting yourself up for a mess, should you unexpectedly loss that account.  In manufacturing it may not be a specific customer, but a product line.  As a rule of thumb, if more than 15% of your business is from one customer you are probably impacting the value of your business, and increasing the risk unless you have contracts in place to ensure future demand.

Q: If you lost your biggest client, would your business have any problem weathering the impact?

Suppliers.    You may not think this of too much reliance on a single supplier as being a risk.   Most companies form trusted relationships with their vendors and suppliers; they want to be viewed as a “Key Account” or partner of that vendor.  Generally there’s nothing wrong with that, but it is also important to have backups in place should something happen to a supplier you depend on.  Even if you aren’t buying from a ‘backup’ supplier it would be a good practice to have the backup identified and readily available to access should the need arise.

Q: How much would your business and clients be impacted if you had a supplier suddenly shut down?

Like every country, Switzerland has its challenges too, but maintaining some level of neutrality has served it well.   Have you ever thought about these key areas in your business?   Do you have some degree of neutrality? Or, are you too dependent on any one of these key areas?    Have you ever experienced an event in your business where one of these dependencies was exposed?  How did you handle it?   Did it impact your bottom line?

As always we love any feedback in the space below.