What doors are you deciding to open and close?

What doors are you deciding to open and close? 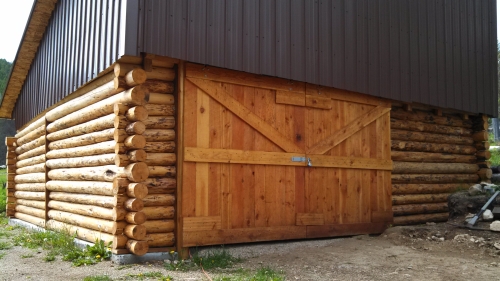 “The doors we open and close each day decide the lives we live.”

As a business owner, it’s a good bet that you’ve had some big plans along the way. Many of the initiatives that are often uncovered when we work with business owners are plans that have been in the works for years, but just haven’t been put into motion. At some point, you’ve probably said you just can’t do it.

There are all sorts of “should of, would of, and could of” reasons given for why that next step still hasn’t been taken.  Maybe it’s because they fear they don’t have the right stuff or they lack of time…or a lack of experience or maybe it’s a lack of commitment.   Sometimes it’s simply a lack of confidence or a fear of failure – what if it doesn’t work?

I would like to introduce you to Jim and Gar.  Jim is a retired high school teacher.  The first years of his career he mostly taught business classes and the later years he was a HS Guidance Counselor.   Gar spent most of his career working as an accountant for a well-known Texas oil company.   Jim is in his early 70’s and Gar, at 80 plus, is 10 years his senior.   Although their permanent homes are separated by several states, for a few months of every year they are next door neighbors near a lake, 6,500 ft above sea level in Montana.

Last summer, with an ample supply of dead or dying trees being supplied by the Pine Bark Beetles, Jim approached Gar with the idea of building a log garage next to his log cabin home.   Why not?  What else do you do after you have celebrated your 70th and 80th birthdays!

Now this isn’t an easy task – never mind that their combined birthdays added to over 150 yrs, to make it even a bigger deal, they had no experience in a project of this magnitude; about the only thing either of them had ever built with logs was what they made with toy Lincoln Logs.   Their plan would need to include building a solid concrete foundation; finding properly sized logs, manually debarking each of them with a drawknife, cutting the logs to length, notching them so they would stack securely and finally lifting them into place.

With limited resources they used ropes and pulleys to manually lift the higher logs into position, (and occasionally they tapped into the labor pool of curious able-bodied onlookers  😉 ). It was slow going, but day by day, with determination and persistence the log garage took form.  Gar, the retired accountant now most comfortable in his bib overalls, always had his notebook and pencil nearby …measuring twice and cutting once was his mantra.   Jim, in the best of spirits was usually jabbing Gar about something, probably a carryover, from his years of challenging his high school students to reach a little higher than they thought they could.   And log by log they were building quite an impressive shed.

Below is a picture from last summer.  That is Jim holding the log and Gar is running the chainsaw. 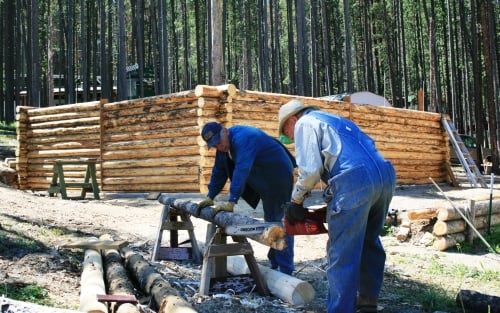 Once they achieved the planned height, they installed manufactured trusses Jim had made by a local company.  Jim admitted they grabbed a few extra bodies to help set these into position before securing a serious metal roof designed to handle the heavy snowfalls of the winter months. Once the roof was done, Gar turned again to his notepad and pencil to design the signature component of the shed, a two section barn style sliding door.

“The doors we open and close each day decide the lives we live.”

The wood for the doors was milled to size by someone else, but Gar and Jim crafted, built, and hung them. The picture at the top of this post is what the completed garage looks like one year later.  Now that’s impressive!  Jim said they still plan to chink the outside, but for these two young guns I don’t think that will be much of a challenge.

So what do you think? Not too bad for a couple of seniors on their first try at doing something neither of them had ever done before.    By the way, Jim said to be sure and spread the word that if anyone was looking for logs to start a similar project he just had another 60 trees dropped on his property and the price is right. 😉  The little Pine Bark Beetles are still no match for mighty pine trees they are assaulting.

What have you been thinking about doing but continue to find reasons not to do it?   Have you ever tackled a project that scared you at first only to find you not only built a new door, but were able to open it and walk through it when you were done?    As always, we would love to hear any comments you have to share in the space below.