What cliché do you use all the time?

What cliché do you use all the time? 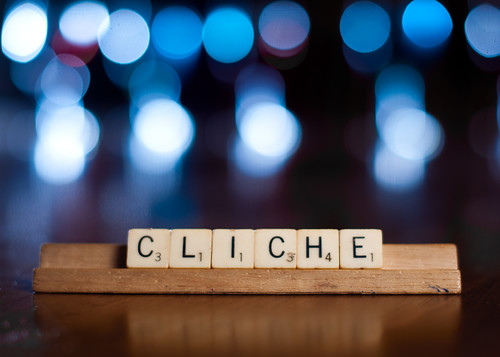 Do you know the origin of the word cliché? (from a Seth Godin post):

In printing, a cliché was a printing plate cast from movable type. This is also called a stereotype. When letters were set one at a time, it made sense to cast a phrase used repeatedly as a single slug of metal. "Cliché" came to mean such a ready-made phrase. The French word “cliché” comes from the sound made when the matrix is dropped into molten metal to make a printing plate.

Who knew the word came from a sound effect?  Great information for your next party!

I was thinking about clichés this afternoon – I was listening to the audio book of The Last Lecture by Randy Pausch (fantastic, powerful book – I’ll write more on it later) and he had some quick thoughts on the importance of those well used (perhaps overused) statements often called clichés.

In his opinion, clichés became overused precisely because they have a powerful meaning – that doesn’t mean you should avoid them, just use them in the right way…especially if you’re talking with kids, because they haven’t heard them before!

The great thing about the tried and true phrases is people can quickly get what you’re saying and it generally gives you some common ground to work with.

Do you have some favorite clichés?

Here are a couple that came to mind that I really like:

“Whether you think you can or that you can’t, you’re usually right” – attributed to Henry Ford.

“If anything can go wrong it will” – Murphy’s Law

There are definitely phrases that are overused – “Thinking outside of the box” comes to mind.  “Core Competency” or “Taking it to the next level” would be some other examples.

Seth Godin created a page where people could vote on the buzz words that annoy them the most – it started as a top 10 list and it now has 410 entries – check out his list of bad business cliches.

What would you vote as #1 in terms of overused or bad cliches?  Share your thoughts and comments below – I’d love to hear them.