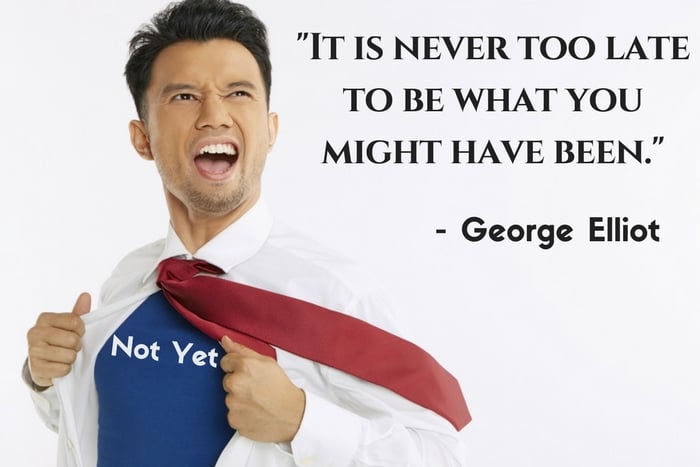 If you could make a minor adjustment in the way you look at challenges that would guarantee improved performance would you do it?   Is there something you have been hoping to get better at but just can’t seem to get any traction?   Maybe you’re spending too much time focusing on the Now and not enough on the Not Yet.

A Fixed mindset operates under the assumption that things are as they are and you really can’t do much about it. You were born with a set level of skill or ability and it doesn’t really change. If you don’t master something quickly, there really isn’t a reason to try and put much effort into it.  A simple example might be learning a new computer skill.  If you don’t succeed the first time or two you try, you may never try it again. You decide you’re just not good with computers. You’re mindset lives in the “Now” and the now is as good as it gets.

On the other hand, a Growth mindset believes that your abilities get better with effort.  Just because I can’t do it today doesn’t mean I will never be able to do it.  Those with growth mindsets view progress as success, you may not have mastered it, but you’re getting better.  When someone with a Growth mindset doesn’t master a new computer skill on the first try, they don’t throw in the towel.  Instead, with determination and optimism, they say “Not Yet” and try again. They may not have much experience with computers, but they KNOW they can learn it. It is a completely different approach.

The reality is we’re all born with Growth mindsets.  Think about babies learning to walk.  What if the first time a baby tried to walk, she fell and gave up? (I’m just no good at walking…).  That would be a Fixed mindset.  The reality is they will try over and over until they finally take those first steps on their own.  They get positive reinforcement from their parents for their efforts, which feeds the Growth mindset.  As they work to master walking, they fall down occasionally, but their mindset isn’t ‘I’ll never get this walking thing figured out, I may as well crawl for the rest of my life.’  No, they say (in baby talk) “Not Yet” and try again.

So what happens?   Growth and Fixed Mindsets

No one is intentionally trying to create Fixed mindsets, however, our brains can often transition to a Fixed mindset unintentionally.  For example, in school, if kids are more worried about their grades (NOW) than if they are learning (NOT YET) their growth mindset will diminish.  In fact, in some of Dweck’s research, the researchers took underperforming classrooms and turned them into some of the highest performers simply by shifting the focus from giving a grade to giving a “Not Yet” score as they challenged them to improve.  So instead of getting a “D” and feeling dumb, they focused on getting better and learning. “I don’t know how to do that math problem, yet…”.

This can easily happen in business too. Employees or entire businesses get in ruts. The general feeling is; ‘this is how we have always done it’ and they stop looking for ways to improve.  “We’re as good as we’ll ever be…”.  The overall mindset of the company is fixed and they are living in the Now. Systems and Processes are needed for sustainable business, but those systems need to include a drive for continuous improvement to encourage a culture with a growth mindset.

Ask yourself if you’re being challenged?  If you’re not, consider seeking out a mentor, advisor, or peer group who will challenge you. Consider new ideas.  Read a book (or audio book), read an industry publication, listen to a Ted Talk, or attend an educational workshop that might stretch you out of your comfort zone, at least a little.  And if your first response to this is I simply don’t have the time, say instead, Not Yet.

Have you ever thought about your own mindset?  What about on a larger scale, the mindset of your company?  Is it a Fixed or a Growth mindset?   Are you sure?   As always we value your thoughts in the space below.