The Most Important Business Lesson of 2015 for me: And all it cost me were two close friends

The Most Important Business Lesson of 2015 for me: And all it cost me were two close friends 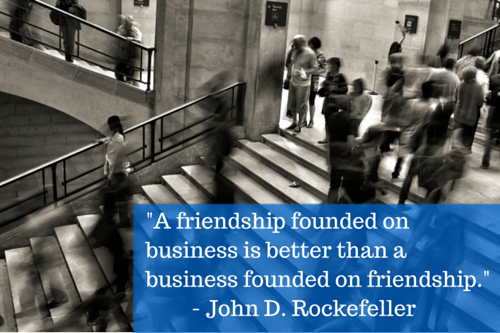 This is a guest post from my friend Stephen Heiner – Stephen has the unusual (unique?) situation of having successfully sold one business only to move to Paris, France and start several more – here’s a big lesson that he learned in 2015.

It’s not a subject with easy answers: can family or friends work together in business?  After losing two very good friends because of a business dispute this last March, my answer is still: “Yes.”

This isn’t to say I haven’t learned a lesson.  It’s just not the lesson you might expect.  Let me explain.

The business I am talking about wasn’t always a business.  It started almost 10 years ago, and revolved around a passion project.  Over the years people who followed this project reached out, and sometimes, collaborated with me.  Some asked, some were asked, but all were excited about the work.  This was so much so that this time last year, we were all together to unpack the year that had just happened and plan out the year to come.

Our volunteer passion project had transitioned into a real-deal business and we would become paid staff.  We would no longer just occupy positions of “enthusiastic volunteers.”  Among a group of 5 senior staff that would go on to abruptly and emphatically resign in March, I was the only one who had created, managed, grown, and successfully exited a small business, so this change was “business as usual” for me.

Not for my staff.  They watched the sometimes cold realities of fiscally responsible business practices snuff out the passion and joy that had animated their spirits in years past.  For my part, I was too busy with other projects to notice the silence, spreading like a cancer, over our team communications.  Worse, I doubled down in business mode, instead of taking the cue (and time) to call each one with the simple message: “I don’t feel right about our working relationship.  Tell me what’s wrong and tell me how I might be able to fix it.”

It wasn’t helped by the fact that all four of these individuals were “I” in the Meyers-Briggs (MBTI) system and as introverts, looked at conflict as something horrible to be avoided rather than how I saw it: something normal and to be looked forward to as a chance to grow.  ENTJs like me “appreciate” conflict because we are already looking beyond it – to the peace and order after something festering is lanced and dealt with.

Of the four people that left the project, two were dear friends, close enough to have been part of my group of groomsmen should I, Deo volente, get married one day.  It was and is, to this moment, a deep personal loss.  Whatever anger I may have felt at their actions pales at the sorrow I feel for so many years of camaraderie lost in a moment.

Almost a year on, I’ve realized that while their actions of shutting up shop, refusing to reach out, and ultimately resigning with no notice whatsoever, putting all our work of the past years under serious threat, were deeply wrong – it was my attitude and management style that drove them to that place.  It doesn’t exculpate them, but it does give appropriate context, and more importantly, it reminds me that the leader is always called to rise above.

And, to come back to my original question, it drove home the lesson that friends and family can work in business together: if you remember that sometimes you need to be more of a friend to someone than a colleague, and vice versa.  If you aren’t mindful and intentional of this gentle balancing act you may, as I did, lose them as friends and colleagues.

Stephen Heiner manages majority positions in 6 different small businesses from his apartment in the 2nd arrondissement of Paris, France.  You can find him on twitter @stephenheiner and read his Parisian adventures at www.theamericaninparis.com.