The Business of Memorial Day…

The Business of Memorial Day… 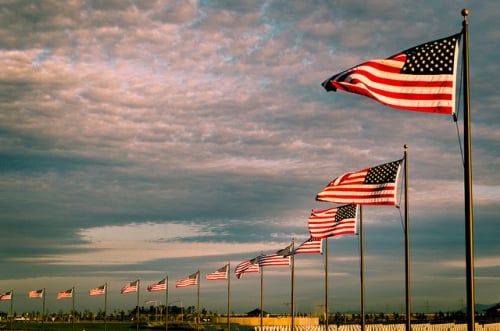 818 Hot dogs every second, that is the estimated number of hot dogs consumed in the USA on Memorial Day!   For the most part, America views Memorial Day Weekend as the official beginning of Summer, weeks before the actual solstice date in June.  And, even with all the American flags flying, the significance of the day can easily be understated.  But it wasn’t always that way.

The History and why we remember…

Memorial Day has roots that reach back to the early 1860’s.  First known as Decoration Day, it was a day to honor the men & women who died during the Civil war.  As one might predict, both the North and the South have separate events that stake claim to the first time it was observed.   However, it did become as annual event and for nearly 100 yrs. Memorial Day was celebrated on May 30th; a date chosen because it was considered an optimal date for blooming flowers.   This was important because those blooming flowers could then be placed on the gravesites of the men and women as a way to honor and remember their sacrifice.

By the early 1900’s another tradition was established with the treatment of the American Flag on Memorial Day.   The flag is raised half-staff until noon, this is to honor the (now) more than 1,300,000 people who have given their lives in service of their country; our country.  At noon the flag is raised to full staff.  This is to honor all of those who served and are among the living in our country.  Many view it as a proclamation of hope by all Americans that those lives lost, were not lost in vain.

I have a neighbor who lost his only brother in Vietnam.   He doesn’t need a history lesson about the significance of the day.  Memorial Day for him and all those who have lost a loved one while serving have their permanent reminders of the special meaning this day holds, why it is a national holiday.  For them, the importance of Memorial Day is as real as it gets.

When the business impact arrived…

In 1968 Congress passed the Uniform Monday Holiday Act.  That set the stage to move Washington’s Birthday, Columbus Day, Veteran’s Day, Labor Day and Memorial Day all to Monday.  And the 3 day weekend was born (at least for all the gov’t employees)   It was another 4 years before the Memorial  Day was officially moved to the last Monday of May in 1971.  Of this group, Veteran’s Day only remained until 1978, but that is another history lesson.

With Memorial Day firmly planted on the last Monday, it allowed for travel that may not have been logistically possible when there was only 1 day to accomplish it.  It allowed additional time to prepare for Memorial Day Parades and Military Honor Guard events.    But, planned or not, the 3 day weekend created an economic boom for our country.  Family gatherings, short vacations, trips to the lake, taking in baseball games or other sporting events, all became more practical and accessible with the extra day added to the weekend.   This year, 37 million Americans are (were) expected to travel during the 2015 Memorial Day Weekend.   And all of those things require people spending money.

You may or may not be involved in a business that directly benefits from all the travel, food, other services that see a major uptick over Memorial Day.  But know that simply by participating you are helping the economy of our great country.  That in itself is an acknowledgment of respect to those who made the ultimate sacrifice so we can all enjoy this day.

Finally, if you have never attended a Memorial Day event consider taking one in, despite all its imperfections it will make you a little prouder to be an American .  And, if you simply find yourself standing over a grill with your favorite cold beverage in your hand, doing your part in contributing to the 818 Hot dogs being consumed every second, remember all of those who gave their lives to make your moment possible.

As always, please feel free to share any comments in the space below.