Simple Success... Is 4 the Magic Number?

Simple Success… Is 4 the Magic Number? 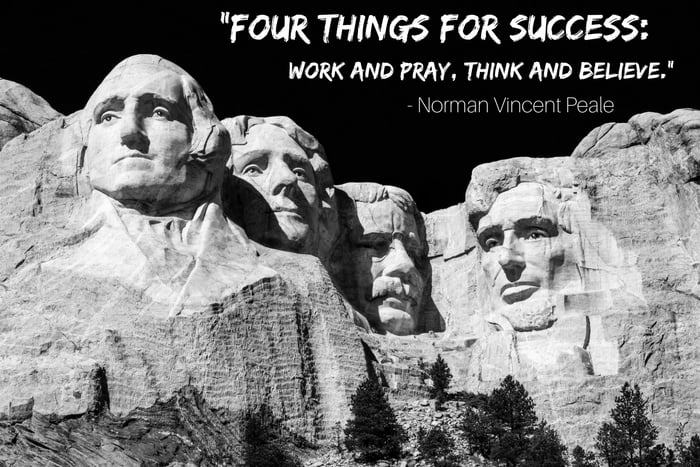 Limiting quantities to “4” as a means to simplify has proven to be pretty successful in a lot of instances throughout history.  Who knows what the original driver was, maybe it started with the human species only having four limbs or was it the four seasons of the year, or the four cardinal directions, or possibly the four main elements?  We know for sure, it was being used long before the 4 Gospels were written.  Whatever the reason, limiting values to 4 has a solid track record of success throughout history.

That said, we thought we would share are few examples where limiting the options to 4 has created some highly effective models for success in business by keeping it simple; some you may already be familiar with.  Then we’ll share a few suggestions where implementing 4 into your business might create some simple success for you too!

In one of most popular business books of the 20th century, Covey introduced his time management matrix in the 7 Habits of Highly Effective People.  It was one of the simplest tools ever created to help people quickly see where they were currently spending their time and where they weren’t.  It was transformational for many when they first practiced using it.  Think how much more complicated this might have been he if would have 6 or 8 boxes vs the now legendary 4 quadrants?

Speaking of quadrants, have you ever noticed how easily we are able to segment everything into quadrants?   There really isn’t a close second.

The 4’s in Assessments….

At some point in time, you have probably taken a personality or behavioral assessment in your life.  Today, there are all types of assessments.   The DISC personality profile has been around the longest, almost 100 yrs.  (Its roots are actually tied to the four main elements, dating it to B.C.)   And though it has evolved over time, the results still yield that you’re most dominate in one of 4 categories.

DISC is an acronym for:

Over the last century, additional assessments like Myers Briggs, Kolbe, HBDI, Predictive Index, Temperament Assessments, and many others have been introduced.  All evaluate using different processes and questions.  But for the most part, the end results still reduce down to 4 main categories.

Apple’s simple success with the number 4….

Steve Jobs understood that companies who have simple business models can replicate the successes much quicker than their complex counterparts.  In 1998 at the MacWorld Expo in San Francisco, Jobs introduce a simple four product quadrant grid.   He created this after finding way too many teams of engineers were working on the Mac and other areas were neglected.   Additionally, the teams were disconnected and as a group, they were not on the same page.  The grid reduced their product focus by simply identifying Consumer & Professional and Portable & Desktop.   It forced the managers and the engineers they were leading to focus on only four core product areas.   It helped them deploy the best engineers where they were needed and eliminate duplication of efforts.    To say it might have been a successful simple 4 could be the understatement of the century.  The value of AAPL stock from 1998 to present has increased roughly 15,000%! 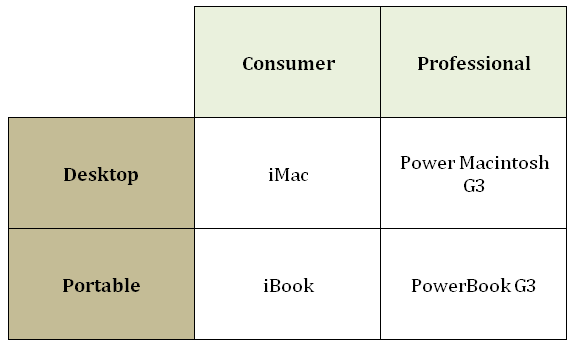 The updated version could be this… 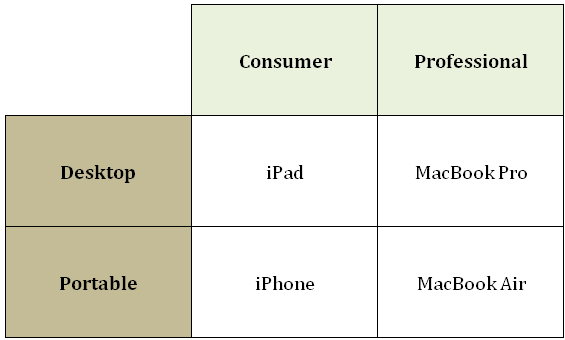 Now, a few places you can try the simple success of 4 in your business…

Products:  The example of what Steve Jobs did with Apple was brilliant.   A lot of our clients have way more than 4 products or services.  Your business probably does too, but it’s worth considering grouping them into segments. This would make it easier for you to manage and your team to produce and sell.  Plus, it will make it easier for your customers to understand what you’re offering.   In the process, you just may find that some of those products need to be cut…that they don’t add value to your business.

Processes:  If you want to scale and grow your business you will need processes.  The challenge with processes is structuring them in a way that makes them simple to follow.   One way is limiting the amount of content in one procedure.

IE:  If a process truly has 20 steps.  Instead of listing 20 steps, break it into 4 steps with 5 action items in each step.  It may seem like a play on structure but it really makes it easier to remember.    Also, eliminate any words that aren’t needed and add photos when possible (pictures can paint a thousand words!).

Just for fun: Here’s a riddle about the magic number of 4…

4 is the magic number, why?

4 is the magic number, why?

Now you give it a try!

What do you think?  Does this make sense to you? When you look at your business are there places you can make it less complicated?  Could implementing around “4” (or simplifying in general) help your company grow?   As always, we value any comments in the space below.