Save Ferris – Lessons learned from a Day Off

Save Ferris – Lessons learned from a Day Off 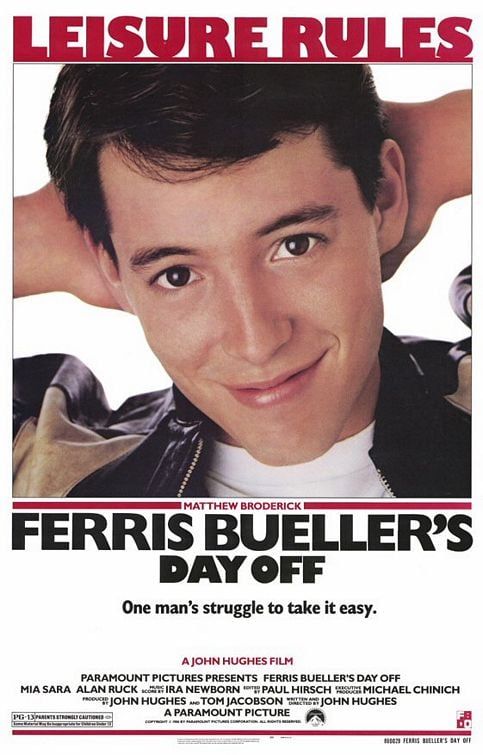 I’ve been on a kick lately to collect older movies – movies that I remember as influential or just entertaining from ‘formative’ years (which probably are still going on now that I think about it).

Some of them have held up better than others (I watched the director’s cut of The Warriors recently and I was really disappointed – there are some great scenes, but it didn’t really pull together the way I remember it in college!).

Anyway, one movie that actually was better than I remembered it (and I liked it a lot the first time around) was Ferris Bueller’s Day Off.  With John Hughes recently passing away, I was inspired to find this and relive one of the best movies of the 80’s.

There are a lot of things Ferris can teach us – even 20+ years later.

The reason Ferris is so compelling – both to the viewers and to all the people he interacts with is because he has boundless confidence – in himself and how the world works.

Ferris has a plan.  He’s going places, making things happen – even with some slips along the way, he continues to believe in himself.

Ferris didn’t take the day off for himself – he did it for Cameron (his best friend).

Pardon my French, but Cameron is so tight that if you stuck a lump of coal up his ass, in two weeks you’d have a diamond.

Cameron has a lot of issues, but Ferris knows he has to shake him up and get him to see there’s more to life than just stress!

Hey, Cameron. You realize if we played by the rules right now we’d be in gym?

Probably the biggest takeaway for me  (when I saw it the first time and when I watched it again) is that you have to have fun with what you’re doing – other wise what’s the point?  And if you’re having fun, being creative – there’s really no limit to what you can do and how people will respond to you.

Life moves pretty fast. If you don’t stop and look around once in a while, you could miss it.

That’s a lesson to live by – what’s your favorite part of the movie?  Share your thoughts below, I’d love to hear them.

1 thought on “Save Ferris – Lessons learned from a Day Off”