Photo from the Library of Congress 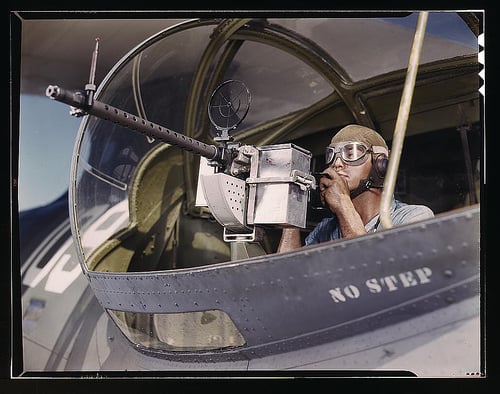 I don’t know how many people have a tendency to over think and analyze things too much.

I have a hunch that it could apply (or has sometime in the past) to a lot of people.  There’s an element of human nature to avoid risk and to take the path of least resistance.

I recently had it apply to me with my business.

One of the difficulties with what I do (Business Coaching) is that it’s not something a lot of people have deep experience with and not everyone recognizes the value of investing in development, independent perspective and candid informed advice.  In other words, it’s not likely someone is going to read an ad, decide to pick up the phone and order up a plate full of Business Coaching (not that’s it’s sold by the plate, but you know what I mean…).

Instead, they understandably need to know, like and trust that particular business coach before they can be ready to decide to work with them.  My marketing approach has primarily been centered around networking, which is working but is very slow and still leaves potential clients with a question mark regarding what kind of advice/work/help I might give them.

So my plan – from almost 4 months ago was to start doing workshops/seminars in order to get in front of people in the right environment, giving value on the right topics.

Ready….aim….aim some more, ready some more…after 3 months, I hadn’t actually scheduled a workshop or made any real tangible progress.  I had spent a lot of time brainstorming the perfect topic / venue / approach but hadn’t made any real progress.

Finally this past month I just decided to get something scheduled, announce it and then see how it went.  I had a good turnout, the topic was well received and overall I think it was a success.   There’s a few things I’ll change going forward, but it was a very valuable first step.

Are you sitting on something big?

Rereading this, I just realized that headline could be misconstrued the wrong way, but what I meant was – in your business, is there a product, or marketing or operational idea that would likely move you ahead of the game that you aren’t acting on?

One of my new favorite bloggers – Dave Navarro (not the musician as far as I know), did a great post on ‘The magic of working for less than you want’  (it’s about 1/3 of the way through the post.  His primary point was that by taking action, you can much more quickly realize what works and what doesn’t work.

In other words, Ready, Fire, Aim is the way to go.

But then he quickly points out that the next step needs to involve studying the outcome of your action, doing some strong planning, changing what needs to be changed and taking more action.

In other words, Ready, Aim, Fire!

It’s the same concept that you should use when you are testing out a new marketing campaign.

What ever you do, keep moving.

The biggest point for me is that you have to TAKE ACTION!  There’s a good article in the NYTimes from a consultant/coach on the attributes of successful entrepreneurs that had a great quote in it:

Fake it until you make it. Entrepreneurs take risks, and they often fail. “It’s better to be decisive and wrong than right but dithering,” he said. “Do your due diligence, move ahead and act as if everything is going to be O.K.”

You can read the rest of the article here.

Along the same lines (and just so I can share an interesting fact), did you know that sharks must keep moving?  Here’s a quote from ThinkQuest:

Sharks’ bodies are heavier than the sea, so if they stop moving they sink. If they want to stay afloat, they must keep moving.

Another interesting fact that I didn’t know until I googled the shark fact… there was a rock band called “Sharks Keep Moving” from Seattle that cut an album in 1998.

So what action are you not taking for whatever reason?  Maybe now’s the time to get it started.  I’d love to have you share it here.