Opportunities and The Solar Eclipse

Opportunities and The Solar Eclipse 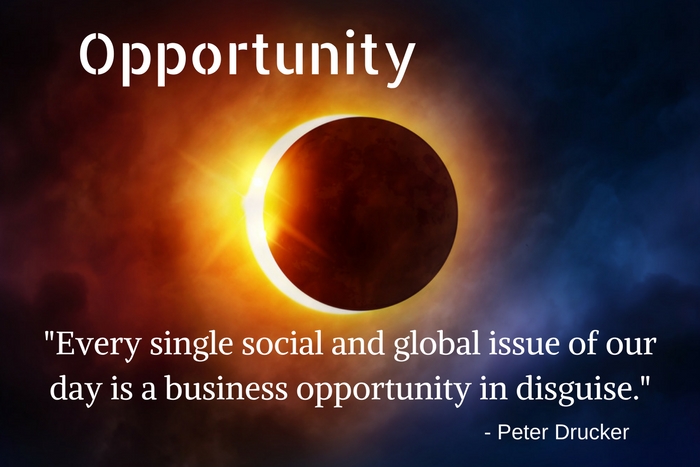 “It’s good to be lucky”.  That has to be what at least 14 state’s bureaus of tourism have to be thinking about the economic impact the Great American Eclipse is having in their states. The 2017 Total Eclipse may be the biggest cross country boost for tourism that a natural phenomenon has ever created.  It’s been a long time coming, the last time the moon took a similar path coast to coast between the sun and earth was 1918.

Many hotels inside the path of totality have been sold out for months.  Restaurants and other service related conveniences have tried to match supply with expected demand to cover the temporary influx of people.  And, those who waited until the last minute found out how hard it was to find a pair of Solar Eclipse Glasses.  Thankfully there’s is always the cardboard box viewer!

Making the most of the opportunities…

One rural area facing a labor shortage is using it as a marketing opportunity for employment.  Sabetha, KS, very near the sweet spot of Totality in the U.S. is promoting “Come for the Eclipse, Stay for the Jobs”.  There are 27.8 Million people in the Driveshed (where cars can drive the quickest to a destination) of Sabetha.   When a natural phenomenon creates a once in a lifetime event you don’t want to miss the opportunity to make the most of it!

All businesses along the path of the eclipse positively affected by tourism will see a spike in business.  As will the many restaurants, gas/convenience stores on the arteries feeding cars to their viewing destination.  Some businesses may view it as being in the right place at the right time as if it was by chance or luck. Although, technically being in the path of a total eclipse isn’t luck at all.  We know the next total eclipse in the U.S. will happen in 2024 and between now and 2040 there will be 15 more around the globe.  So you can start securing your viewing areas today if want to capitalize on it.

Just as there were hundreds of communities & cities in the path of the 2017 Great American Eclipse, rest assured some of them earned significantly more dollars from tourism than other cities along the path of the eclipse even though they offered a very similar viewing experience.    This isn’t endorsing price gouging or anything like that; it’s just obvious that some communities went to great lengths in rolling out the red carpet for their visiting part-time astrological explorers.

What about you personally or your business?  What are you doing to seize opportunities when they come along?   Here are a few suggestions so the next time something presents itself you can be better prepared to capitalize on it.

When it comes to opportunities you have to be open to taking the first step.  But unless you see them as opportunities you will never even know they were there.   What are your thoughts on opportunities?  Have you ever missed out on a big one?  What is one you went after successfully?    We’d love to hear about them!

Please feel free to add any comments in the space below and feel free to share your thoughts on Total Eclipse too!