Is this going to be your lucky year?

Is this going to be your lucky year? 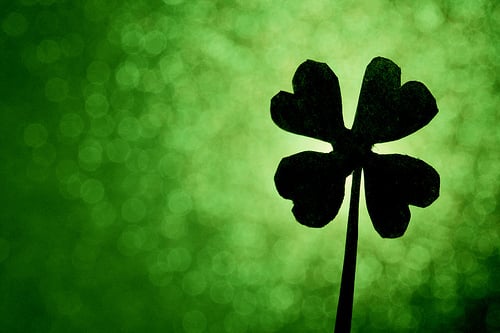 This is the time of the year when everyone is wishing you good luck.  It’s a great sentiment and certainly everyone would like to have a bit more good luck…especially after the last few years.  However Luck isn’t all it’s cracked up to be…in fact it turns out that what you do with the Luck you get (good or bad) is really what determines your long term success – you could call this your Return on Luck (ROL).

about a year ago.  Positive Return on Luck was one of several key findings that differentiated hugely successful companies (Great) vs. those who failed or just didn’t make the cut.  What’s really impactful about these finding is that it’s not just an anecdotal experience or a few quick interviews and an example – Collins and Hansen worked with a team of 20+ researchers over a period of about 10 years looking at data and interviewing people from thousands of companies and a time span of about 30 years.

The premise behind the book was to be able to answer the question: “Why do some companies thrive in uncertainty, even chaos, and others do not?”  The goal was to make this study as scientific as possible but they knew they would have to address the concept of Luck…”Sure company X was successful, but they were extremely lucky…anyone would have succeeded with the opportunities they got!”.  In fact the team went into the research assuming they would see disproportionate luck (good and bad) and that would be a key driver for the winners and losers.

In order to find out what role Luck really played, they went through the painstaking effort of reviewing all of the key company’s histories and identifying ‘Luck’ events.  These were things that happened unexpectedly and outside the influence of the company that were good and bad.  They then went on to review what happened to the companies as a result of the ‘Luck’ events.  What kind of Return on Luck did each company get?  There were several interesting findings in the study:

1. Luck is evenly distibuted – you are not more or less lucky than others

Much to their surprise, once all of the numbers and research was pulled together, it turns out that companies in general experienced an equal number of good and bad luck events.  If anything, the less successful companies (the control group) had slightly more ‘good’ luck than the Successful companies (the team called them the 10Xers because their overall returns were at least 10X better than their competitors).

So even though it may feel like you’re getting an unfair share of bad luck…or a competitor of  yours is exceptionally lucky, there are thousands of data points that would say that you’re wrong.

2. Although the distribution of luck was fairly even, the outcomes of what was done with that luck varied a lot!

The 10X companies (the successful group) had much higher Return on Luck for the positive luck events that happened to them…and conversely they also minimized the impact when bad luck came their way.  This was attributed to a few different things:

So what’s the point for you?  As you plan for next year, it’s great to hope for some good luck, but if you really want to be successful then you should also spend some time planning for possible bad luck events (and what you could do to minimize them) and focus on your execution…if you landed that super big client next month, are you really ready to make that a great experience (for them and for your employees) and deliver exceptional results?  If you’re hesitating at all with that idea, then what could you possibly to do increase your capabilities?

What’s your take on luck?  Do you hope for the best but plan for the worst?  Would you be ready to jump into a major new deal tomorrow if it came knocking?  We’d love to hear your thoughts – share them in the comments below.

1 thought on “Is this going to be your lucky year?”