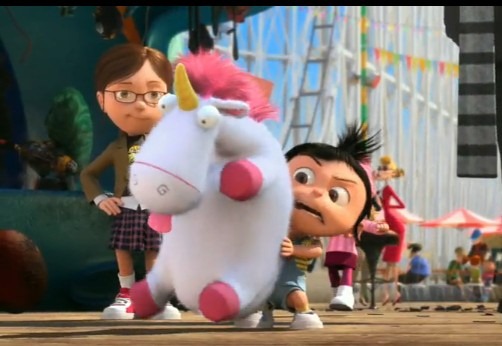 It’s so Fluffy!!!!  from Despicable Me

Do you ever get that feeling that you’re just beaten down…that it’s too hot and nothing really matters?   There are times (especially after you make the mistake of watching the news) when it seems there’s nothing out there but bad things, people struggling and an endless parade of gray.

Well it’s time to perk up because I’ve got 3 things to inspire you:

It may not sound like an inspirational list, but keep reading and I think you’ll find something to get you moving!

Bookbinding as a hot new business!

There are plenty of stories out these days about businesses failing and industries going bankrupt, which makes it especially refreshing to hear about a skyrocketing success that leverages techniques that have been around for centuries and technology that’s been around for decades.

The company is called DodoCase and currently their sole product is a hand made case for an iPad.  Priced starting at $60, more than 60,000 cases were sold in the first few months after the release of the iPad, with much bigger numbers planned (the iPad is projected to sell 17 Million units in the first year of production).

DodoCase uses a local San Francisco bookbinding company to create the custom cases – saving a dying and declining business (and in fact tripling their headcount with more to come).  Check out this great story about Dodocase – the winner of the Shopify business contest.

What simple product do people want and need that you could deliver?

Toms Shoes started back in 2006 – you might have heard of them.  The founder Blake Mycoskie was inspired on a trip to Argentina where he encountered lots of children who didn’t have shoes.  That trip inspired the company’s very straightforward premise:

With every pair of TOMS shoes you purchase, TOMS will give a pair of new shoes to a child in need.  One for One.

The idea of helping people out is pretty inspirational – but even more amazing is the business model Mycoskie is using to help  those people out; a for profit, socially conscious business.  The company isn’t looking for a handout, they won’t be signing up for grant money, but they have a bigger purpose beyond just making money…and that’s making a huge difference!

As Mycoskie puts it, there are some great benefits to having such a clear and unselfish value statement:  “First, consumers are now conscious about where they put their dollars. A product like TOMS that gives to others is appealing to people more than ever.”  Another major benefit is the attraction of well above average employees who are willing to work for less than average pay.  Read more in this article from Success magazine.

What core values does your company stand on and how does it impact your business?

It’s so fluffy!  Inspiration from a unicorn.

The technology behind movies continues to be amazing, but what’s even better is when the technology takes a back seat to a creative story and great writing (and acting).

Sometimes you need to find your inspiration in the little things that are around you – comedian Louis CK had a great interview with Conan O’Brien a while back where he talks about how Everything is amazing and nobody is happy.  We definitely take things for granted these days – if we took the time to really look around at our day to day things (like 3D animated movies) we would find a lot to be inspired by.

The reality is that we’re lucky to live at a time when amazing and creative things are created almost every day.  One of the more recent examples of inspirational creativity is the movie Despicable Me released to theaters just a few weeks ago.

If you haven’t seen it yet, make the time to catch it in the theaters (3D is good, but you’ll enjoy it just as much in plain old 2D).  The animation is great, but what really stands out are the characters and the overall premise.

It’s a story about Gru who’s gunning to be the most famous super-villain of all time.  He’s had some success so far, he has his own army of minions and he has a rival arch-nemesis, but he just hasn’t hit the big-time yet.

In a desperate contest to steal the moon and become famous – Gru ends up taking in 3 orphans that ultimately end up melting his heart.  It’s got a lot of style, it’s very funny and everyone in the family will enjoy it – for your final bit of inspiration, go see Despicable Me.

What’s inspired you lately?  Share your thoughts in the comments below – I’d love to hear them.