Is your business leaving a wake?

Is your business leaving a wake? 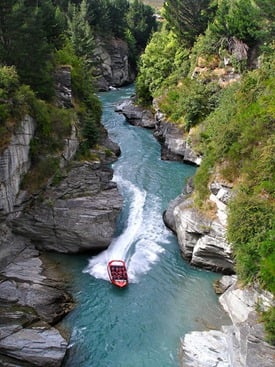 What’s your engine like – you know, the engine on your business?

When you have an engine on your business – a big engine, one that can really crank up the RPMs, you are going to make some noise…and you’re going to create a wake!

With your engine really cranked up, there’s no telling how fast you can get moving and you’ll definitely build up a lot of momentum.  It’s true that you might run the risk of crashing into rocks but having that momentum, that speed, that control over the engine is also what enables you to safely steer the boat.

Think about businesses you might know that don’t have an engine (or don’t use it).  They float around – pushed by the currents, the wakes generated by other boats, even the wind moves them around.  In fact, without an engine, those boats really are at risk for running into the rocks – they don’t have any way to steer and they certainly can’t build up any momentum to run upstream at all!

Are you waiting for the phone to ring and hoping it’s new customers?  Or have you strategically selected a few marketing strategies and you’re pouring time and effort into making those strategies work?

Have you hired nice people who after interviewing a handful because they seemed like they ought to be able to help you out?  Or have you clearly laid out what’s needed to really succeed and carefully hired people that really fit your core values and are capable of getting the job done (because they’ve accomplished things before)?

Are you anxiously checking your bank account when it’s time for payroll, hoping there’s enough money in there?  Or have you mapped out the amount of money coming in and the amount of money going out so that you clearly know when or if you’ll be a risk long before that actually occurs?

Victims of circumstance…with no engine

Unfortunately way too many business owners don’t drive their business – instead they get run over by it!  It’s an interesting phenomenon, but I’ve seen it happen time and again.  Even if you don’t completely know what to do, if you decisively take action, if you push yourself (and your company) to make things happen – good things will come of it.  You may not get the outcome you thought you were going to get, but the activity, the momentum, the decisiveness will cause opportunities to come to the surface.

Compare that to the alternative of waiting and hoping that you don’t crash and burn.

It’s a rough economy out there – but the best way to survive the rocky areas is to aggressively throttle through them.  If you stop and spend a lot of time trying to figure out what to do…you’re almost guaranteed to hit the rocks and sink.

So what’s the engine like on your business?  Are you using it?  How could you take action this week and make something happen?  I’d love to hear your thoughts – share them below in the comments!

photo by Alex E. Proimos (the photo is from the Shotover River in New Zealand – I was lucky enough to go a long time ago and it’s a spectacular ride!).

2 thoughts on “Is your business leaving a wake?”