Is it right to raise prices when you aren't adding any more value?

Is it right to raise prices when you aren’t adding any more value? 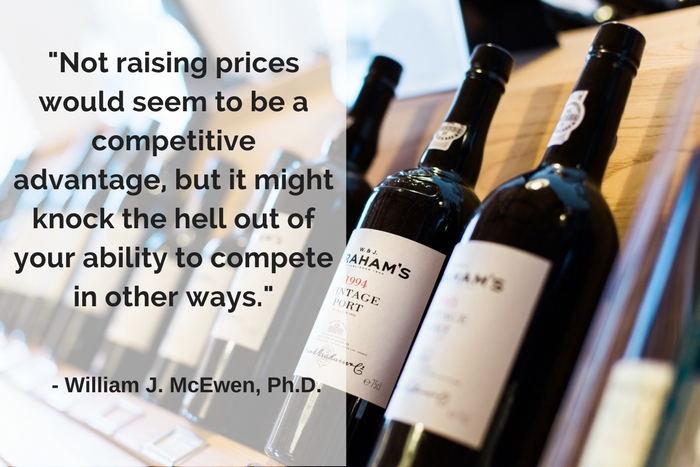 It sounds like a challenging conundrum… but it turns out it’s not.

I recently had a client who was struggling with raising prices on some ancillary services – from an ownership and bottom-line perspective, it was clear that it made sense to raise prices (it’s been 10 years since the last time they were raised) but a couple of the staff members raised an issue that on the surface sounds pretty legitimate:

“Is it right to raise prices when you aren’t adding any additional value?”

In general, I applaud the mindset of looking out for the customer and thinking about the value that’s added.  That’s a great place to start and generally that approach won’t steer you wrong.  However, in this case it doesn’t really apply because you should be at least considering inflation over the last 10 years.  According to the US Inflation Calculator (I know – I didn’t know there was one either…), in the last 10 years we’ve seen 13.8% inflation – meaning that something that cost $100 in 2008 now costs almost $114.  That sounds low to me, but the point is the same – whatever profit you were making on that service 10 years ago, you’re now making quite a bit less and in some cases, you might even be losing money if you haven’t raised your prices.

The other thing to consider is that most small businesses underprice their services to begin with – so if that was the case here, not only are you losing margin due to inflation, but you also didn’t make enough margin along the way. That’s not a healthy recipe for a long-term business.

There are some who will equate profits with greed, but the reality is that you cannot keep your doors open, continue employing people and adding value to your community unless you’re making a healthy profit.  As a business owner, one of your key jobs is to make sure you are keeping a close eye on your profitability – and raising prices is one of the few levers you have to pull to make that happen.

But what about the risk of losing customers…?

Often when this discussion comes up with business owners, one of the first things they bring up is that they can’t afford to raise their prices because they can’t afford to lose any customers.  It’s a valid fear… kind of.  Let me give you a couple of examples that happened to me in the last month:

Constant Contact – I received a very professional, concise letter (snail mail) from Constant Contact a few weeks ago informing me that their rates were going up and that my cost for using their services would go up by $5 per month – a 12.5% increase. They didn’t list any reason for the increase, they didn’t offer me any additional value or any other changes… just a pretty big price increase.  This happens to be the 2nd or 3rd time they’ve raised their prices in the last couple of years (by my perception at least).  I’ll admit that I’m annoyed and it’s crossed my mind to look for another provider – but it’s been over a month and I haven’t done anything yet, so it’s likely I’ll just suck it up and continue on with them.

Eventbrite – Eventbrite went about things a little differently.  They launched a whole new set of service offerings – expanding from a primary pricing plan to a tiered pricing plan, with higher tiers allowing for additional features and services.  If you converted to the basic offering, your spend was about the same as it had been before… but you ended up with a lot less functionality.  If you wanted equivalent functionality, then you had to upgrade, which was 50%+ more expensive.  I’m not convinced the upgrade actually gave me any new features (that I cared about), but it’s hard to tell since they moved everything around.

Again in this case, it crossed my mind that it was time to look for another provider.  But I’ve mostly been very happy with how they operate and other options appear to be about the same price range – which perhaps means I’ve been getting a good deal the last couple of years (and all good things must come to an end).  I’m not planning on making a change at this point.

What’s the point?  You should have some concerns about raising prices, there is a point where you will start to lose customers.  However, if you generally do a great job and make their lives easier or better in some ways most of your customers won’t make a switch.  And… because of inflation and the need to maintain a healthy profit margin, you must raise your prices every few years or risk going under.  The exception to this is when the market gets disrupted for some reason – maybe a new technology comes out that allows for a cheaper, better way of doing things (think Netflix vs. Blockbuster).  When that happens you need to be ahead of that disruption curve or plan on moving to a different business.

What do you think?  Are you comfortable with your pricing?  When’s the last time you reviewed it – and what did you do?  We’d love to hear your thoughts – leave us a comment below.