How to build your business over coffee!

How to build your business over coffee! 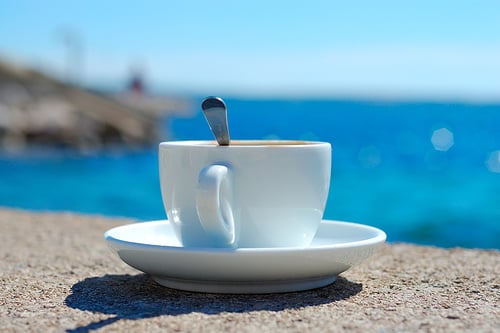 A lot of business owners talk about growing their business by networking.  You imagine a crowded chamber after hours meeting and it’s hard to picture generating business in that kind of setting.

The reality is you can’t (or at least it’s unlikely).

What you can do at those kinds of events is meet new people and determine if they have any potential to collaborate with you in the future.  If they do and you can develop a mutually beneficial win-win relationship  over time with someone you get to Know, Like and Trust.

THEN you have some good potential to generate new business from networking!

I had a great demonstration of this the other day over coffee.

The situation was coffee with a networking contact of mine who I’ve gotten to know over the last year.  We work with similar types of small business owners and we recognized early on that there should be opportunities to help each other out.

However we hadn’t really tangibly made anything happen to this point.

The end of the year rolled around and I received an email asking about catching up and getting together since it had been a while (clearly a scheduled and planned approach for my contact).

We had a good meeting, a chance to catch up on mutual acquaintances and then he moved into his referral process.  He started by explaining what his company was up to and what had been working for them with customers recently (giving me his best target market) and then mentioned that it would be helpful if I could introduce him to 1 prospect who fit his target.

From there, he asked me how things were going, what was working for me and what kinds of things I was looking for.  He suggested a couple of possible introductions that he could make and then he came back and very simply asked if i knew of anyone that was a good fit for him – and could the 3 of us get together for lunch sometime?

It turns out we both had some ideas for potential introductions.

What made this work?

For starters, we already had a relationship established, including a level of trust and credibility from previous meetings and mutual acquaintances.

The timing was good – we hadn’t talked for several months and although I had passed along a lead during that time, he wasn’t top of mind the entire time so it had been awhile since I had brainstormed who might be a good fit for him.

He clearly laid out what he was looking for, with a focus on the type of prospect that I was likely to know and explained the next steps he would be looking for (mutual introduction over lunch followed by a no-cost, painless review to see if they would be a good fit.)

He was only looking for 1 introduction (took the pressure off and made it easy to brainstorm a best solution).

He asked what I was looking for and genuinely looked for ideas on how he could help me, recognizing that the process needed to be mutually beneficial.

And finally he followed up a second time, even when I didn’t have a great idea right up front.  By giving me time to think and brainstorm some specifics, I was able to come up with a good fit – and potentially a situation where they can help each other out.

Finally – follow through right away.  We both took action after the meeting to get things started.

Although it’s only been a couple of days, we have both gotten the ball rolling on mutual introductions and invitations to meetings.  At this point it’s unclear whether either set of introductions will turn into any opportunities, but a warm introduction to a business owner that fits my target market and is actively trying to grow their business is like gold to me!  I’ll take that situation all day.

What could this type of thing do for you?

What if you held a similar type of coffee meeting with 20 people in your network, that you Know, Like and Trust and that have some access to your target market (and vice versa)

To be conservative, let’s assume that only 12 of your contacts could come up with anyone to introduce you to and only 1/2 of those actually turned into clients.  With very little cost and effort, you generated 6 new opportunities for your business!

And the kicker is that you could repeat the process every 4 to 6 months – potentially generating 12 to 18 opportunities in a year!  What would that do for your business?

What would it take for you to give this a try?  What would be the hardest part?  Are you actively building up your contacts (working LinkedIn, other networking) so that you can be a valuable partner to others?

Share your thoughts in the comments below, I’d love to hear if this would work for you?

2 thoughts on “How to build your business over coffee!”