How do you create Advocates for your business?

How do you create Advocates for your business?

Stephen Heiner is a client of mine and the owner of Get Smarter Prep – an ACT/SAT test preparation company (the scores you need for the schools you want).  Get Smarter continues to do very well  – although he did go through some challenging times in last couple of years.

But beyond the success, Stephen has created something that’s bigger.  He’s created a product that his customers talk about – and go out of their way to tell others about.  He’s created a large number of advocates that are the biggest key to his success.

So what’s his secret – how has he transformed his buyers into advocates that go out and sell on his behalf?

First let’s take a look at some of the struggles:

Like a lot of small business owners, Stephen struggled to find a formula that really worked for his business.  Although he has a fairly narrow target market in the sense that it’s parents of Juniors in high school, logistically there’s a challenge in the best way to really get in front of that group in the most effective way.

Again, like a lot of small business owners, Stephen tried out many different kinds of marketing – magazines, advanced networking (Stephen joined 11 Chambers at once), direct mail, and various PR ideas.  None of these was necessarily a bad choice and they did have the benefit of getting his name out into the marketplace, but with money and cash flow always an issue it was impossible to be consistent.  Which meant it was difficult to be effective.

Studies show that prospects need to see your message multiple times before they are really going to notice and consider buying.  By jumping across lots of different marketing efforts, a lot of the target market didn’t get a consistent message – largely wasting a lot of that effort (and a lot of money…)!

Being the focal point for the business 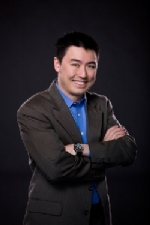 (working IN the business)

Stephen is a fascinating guy – a former marine that’s currently pursuing an MBA, extremely well read, doesn’t own a television and confident in many strong  opinions on diverse topics like religion, politics, education and business.

However, Stephen made the mistake that a lot of business owners make early on (often because they don’t have a choice) and did everything in the business himself.

Every key decision, every detail and most of the actual work was done by Stephen.  As a small business owner, that’ may be the way you have to start out, but as you grow it’s critical that you build something that’s bigger than you can be by yourself.  Eventually you have to be able to successfully delegate and let go of the reins.  You still need to know what’s going on, but you have to take yourself out of the critical path.

Your job as the business owner is to look at the strategic picture and work ON your business.

Stephen aggressively started pursuing that idea towards the end of last year and as of last week he believes that he has achieved a situation where the business can run, successfully, without his active presence (if it had to).  (Which is a good thing since he’s going to school almost full time to get his Master’s degree…).

The big reason for his success…!

There are several reasons why Stephen is successful – here are a few of the highlights:

As you can probably imagine, the decisions above aren’t the low cost approach.  Stephen offers a superior product at a price point that’s higher than most of the industry.  However the results clearly indicate that you do get what you pay for.  When an improved score can generate thousands of dollars in scholarships, that extra investment of a couple hundred dollars is certainly well worth it.

But beyond all of that, what has really made Stephen successful is the relationships that he (and the company overall) have developed with their clients.  Not only does he consistently over deliver (on purpose) but he and his staff go out of their way to develop positive, helpful relationships with the students and the parents.

One example that happened recently is that Stephen had some late sign-ups that inadvertently created the situation of 9 Students in 2 of the classes.  Since the 8 to 1 ratio is really just an internal guideline, Stephen could have easily and justifiably let the situation slip and let it go at that.

Instead he wrote a letter to the parents of all the students in those 2 classes apologizing for going for the 9 students in a class (instead of 8)…and he wrote everyone of those customers a $100 check and an offer to talk with them in further detail if necessary – that’s $1800 that he didn’t need to spend (and couldn’t necessarily afford…) just to make sure he was doing the right thing for his customers.

Is it any wonder that his customers go out of their way to be an advocate for Get Smarter?