Help them Trip over the Truth...?

Help them Trip over the Truth…? 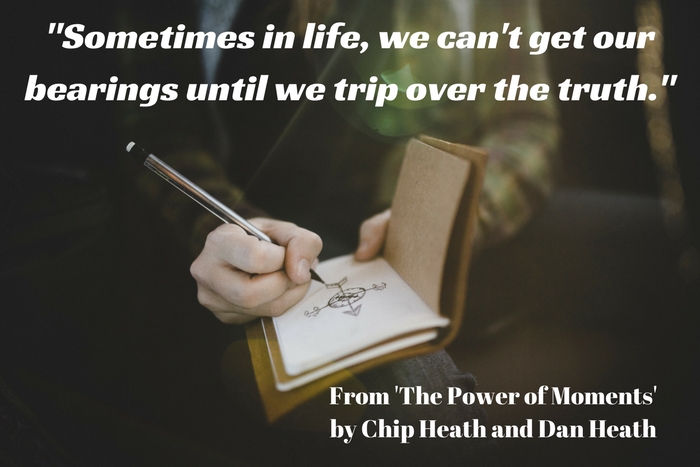 It’s very difficult to convince someone else by ‘selling them’ on your great idea.  If you’ve ever been in that situation, you’ve probably noticed that the harder you try, the more resistant they are to your idea.  That’s because of a core psychological concept that we all have – it’s called the law of psychological reactance – which basically says:

If someone tells you to do something, you probably won’t feel like doing it, even if you might otherwise have wanted to.

Think about trying to tell a 3-year old what to do – as the adult, you will (probably) eventually be able to force your will but that kid will fight you every step of the way.  We’d like to think that, as adults, we’re driven by logic and reasoning, but the reality is that the we all start pushing back when we get pushed – even if it’s a subconscious reaction.

What can you do about it?  Try a completely different approach…

Instead help them ‘Trip over the Truth’…

In their excellent book ‘The Power of Moments’, authors Chip Heath and Dan Heath talk about different ways to create memorable and impactful experiences.  One of those types of experiences is a moment of insight – an epiphany when you suddenly realize something new or perceive something in a different way.  Often these ‘eureka’ type moments happen on their own, but it is possible to create them for others – and the technique for doing that is what the authors called ‘Tripping over the Truth’.

Tripping over the truth happens when there is:

When you can help your audience (prospect, client, employee, child or whoever you’re trying to influence) experience the challenge for themselves, you completely avoid psychological reactance and you remove most, if not all, of the natural resistance to the idea and the solution.

Microsoft executive Scott Guthrie had a great example of this when he was tasked with rolling out a new technical cloud computing platform called Azure in 2011.  He started by talking to customers who told him that the technology was good – but it was very hard to use. So Guthrie, rather than just telling his new team to fix things, instead called a 2 day offsite meeting with all of this key team members and challenged them to use the platform and develop an App – the type of thing that their customers were trying to do all the time.  Faced with what should be an easy challenge, his team struggled mightily and quickly realized that they had serious problems.  They tripped over the truth that their product was very difficult to use.

Another example comes from a small business owner who had implemented a 401K matching program within his company and he was frustrated with the extremely low participation from his employees.  This business owner was generously offering to match up to 3% of any contribution his employees made, but only a handful of them were taking him up on it.

Rather than lecture the employees on fiscal responsibility and taking advantage of opportunities, the owner instead called an all-hands meeting at the end of the year, where he brought in a large bag filled with cash.  Dumping that cash out on the table, he told his employees that this was all of the money that they could have had if they had signed up for the 401K plan.  Instead he was going to take all of that money back to his bank and put it back into his own account…!

At that point, he had their attention and he told them that he would be scheduling another meeting like this one next year.  And he would be showing them the money they weren’t taking advantage of – the only question he had for them was whether or not they wanted to take that money for themselves next year or watch him bag it all up again?  The outcome? The team jumped at the chance to fill out the paperwork for the 401K plan…  He caused them to trip over the truth of the money they were literally leaving on the table.

Tripping over the truth means finding a way to help your audience feel the impact of the problem.  It’s more likely to be emotional, visceral and tangible – something that will cause a clear reaction.

A final example – I had a client who was holding a first pitch meeting with a great prospective customer.  The customer asked if there was a way to skip the Powerpoint slides for this meeting (they had been seeing a lot of pitches lately).  This turned out to be a great opportunity for my client – they came up with a fantastic, interactive demonstration of the challenge (and the product) that really grabbed the attention and emotions of the participants.  He helped them trip over the truth.

Think about your world.  When’s the next time you’ll be trying to influence someone and get your point across?  Rather than just trying to tell them about it, or sell them on it, what could you do to help them experience the challenge and feel the impact? What questions could you ask that would lead them to the conclusion you’re trying to reach? How could you help them trip over the truth? Try it out and let us know how it goes.

Is this something you’re already doing?  Have you tried this before? What’s that look like?  We’d love to hear your thoughts and any examples – share them in the comments if you get a chance.