Prefer to listen to this post? Click the play button below and let us know what you think in the comments below: 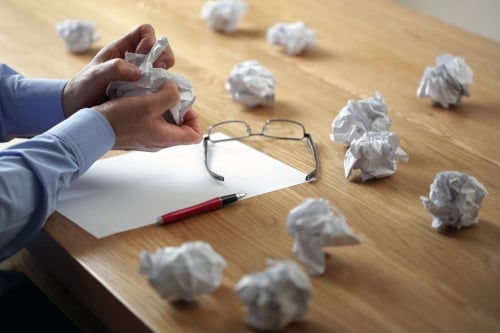 Do you spend a lot of time avoiding failure?

How do you react to a failure on your team? Unfortunately most of us in a business environment view failure as unacceptable and will go to great lengths (including not trying something) just to avoid the risk of failing. And to make matters even worse, failure of any kind within the team is usually punished harshly, sending a clear message that a new approach or pushing the envelope is a bad idea.

Everyone loves success and winning…and if you can skip directly to that point in everything you do, then you’re set for life and you should be writing books about your magical abilities. However for the rest of us, the problem with success when you look at the big picture is that you don’t learn anything from it. When you’re successful you’re just going to to duplicate whatever you just did – there’s no incentive to learn or to grow.

Failure on the other hand, gives you a lot to think about and a huge incentive to learn a lesson, to change and get better.

“Failure is simply the opportunity to begin again, this time more intelligently.”

The world is changing – and those changes come faster every day. The long term winner is going to be those who focus on learning and growing and the only way to learn and grow is from failing.

Consider the recent sad tragedy with the Virgin Galactic Space crash, in one of the last few test flights before they planned to launch commercially Space Ship Two crashed shortly after separation from the launching platform ship. One pilot died and the other is severely injured. No one wanted this failure to happen but now that it has, Virgin Galactic has a choice – they can either stop trying or they can learn from this and come up with a better solution…learn and grow.

“Space is hard – but worth it. We will persevere and move forward together,” – Sir Richard Branson, founder of Virgin Galactic

The good news for almost all of us in the business world is that failure is rarely a matter of life and death (although it sometimes comes across that way). I’m not suggesting you should be seeking out failure but you have to allow it to be a possibility and when it happens you should celebrate the opportunity to learn from it.

How to Incorporate Failure into your business

Nobody likes to fail, but realizing that it’s the only way to truly move forward, the first thing you have to do is change how you look at failures. Historically you may have looked at a failure as a huge setback, maybe you got mad or depressed and reacted emotionally. However if you look at a failure as an opportunity to learn and improve – for you and for your team then the next failure takes on a different aspect and becomes something you can work with.

“Success is the ability to go from one failure to another with no loss of enthusiasm.”  – Winston Churchill

2. Engineer opportunities to learn (and to fail)

In his book Great by Choice author Jim Collins suggests the idea of firing bullets before firing cannonballs. He learned that the most successful companies that he studied had a practice of launching new ideas or products in a very small and controlled way – which let the team fail and learn without causing a major impact. Do you have a great idea that you’ve wanted to try but held back on because you didn’t know if it would succeed? Come up with a way to trial the idea in a way that a failure won’t really hurt but could still teach you a lot.

If you really want to make a tangible change to your culture and your environment then it might be time to adopt a ‘failure of the month/quarter/year’ award. The idea is that you want to encourage your team to try new things and even when they don’t work out they should be rewarded or at least recognized in a positive way for trying. To be clear, you’re rewarding people who purposely try something new, not someone who just got lazy and screwed up. It may feel unnatural at first, but it will send a strong message that you truly value creativity and innovation.

How do you deal with failures? Do you have some other ideas on how you could promote the idea of failing forward at your business? We’d love to hear your thoughts – if you have a minute, share them in the comments below.

1 thought on “Failure isn’t the end, it’s the beginning…”