Election 2016…what have we learned? 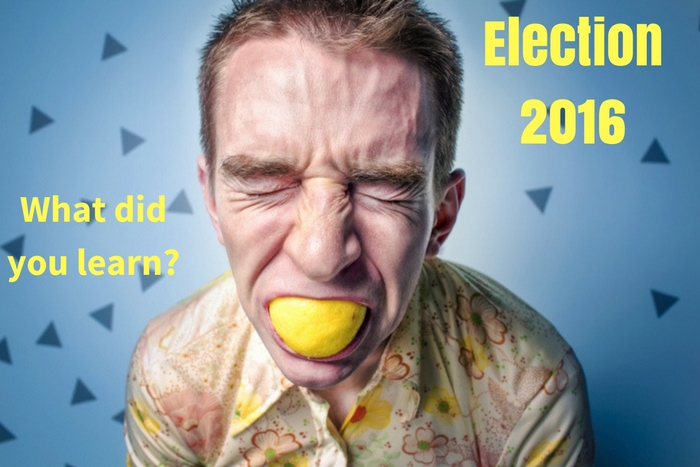 It’s been painful, but the end is here!  After enduring a Presidential Election that has been like the nightmare you just can’t stop repeating, the end is finally here.   But even at this point, the only thing we can safely predict is that the endless barrage of campaign commercials, yard signs, billboards, and social media feeds is going to end.   For everything that may follow, all we can say is…stay tuned.

What have we learned?

That is a good question.  Our goal is a succinct post each week to help you sharpen your saw and make your business a little better; a COO client of ours recently shared they never miss them for that reason.  So with the Election Day finally upon us, here are a few lessons I think we can all use as take-a-ways from this campaign and hopefully apply them to your business for positive results.

Remember the acronym KISS? It works.  The simpler you can keep your message the more likely people will remember it.   It is easy to overcomplicate things, this goes for everything from marketing, to developing processes, to creating compensation programs.  When it is too complicated you lose and confuse people.   Trump started out with “Make America Great Again” and he got a large following to rally around that because it spoke to them.   Obama’s were “Change” & “Hope” in 2008 and that resonated with voters.

Without a Niche, it’s Hard to Excel

It is very hard to be all things to all people.   Bernie Sanders message resonated with the younger demographic, many who had never participated in an election before and he kept his message on point.  Focusing on this niche, his message gained momentum and created an unexpected challenger for Hillary Clinton previously assumed to be a given for the Democratic nomination.   In the Republican camp, instead of strategically narrowing their field before the primaries, they had 18 people running for President and it ended up diluting the message when they needed to be unifying. While Trump was being dismissed as a sideshow by his adversaries, the seasoned (R) politicians, his primary niche was larger and he started gaining traction while knocking them off one by one.

There is little privacy left in the world.  We share our lives in real time on social media.  Today, everyone has HD video and audio recorders as standard equipment on their phones.   Every word you speak can be dissected into sound bites to spin it positively or negatively or get printed out of context.    If you’re striving to build a reputable business it is imperative that everyone in your organization understands that their actions are a reflection of not only them personally but the entire company.  Before you post, tweet, or speak, a great litmus test is to ask yourself if your Mother, the Pope, or someone you respect would approve before you hit send.   Who knows one day you may decide to run for office too!

So what do you think?  This may be like opening a can of worms, but what about you?  What have you learned from this Presidential Election?  We do value any and all comments in the space below.