Does Your Business have a Circle of Safety?

Does Your Business have a Circle of Safety? 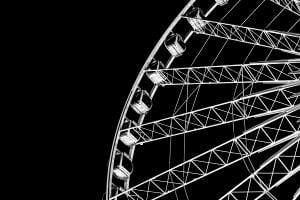 The Circle of Safety. In his latest book “Leaders Eat Last” Simon Sinek uses this term to describe businesses that thrive because everyone inside the circle looks out for each other.   There is trust inside the circle.  You don’t spend your day looking over your shoulder.  The Circle of Safety wraps around the entire company, not just a limited number who have a title of authority attached to their name.

The Circle of Safety builds and promotes a culture of helping each other.  Instead of worrying about who is going get credit for everything, the focus is on the company getting credit.  You trust that the whole and not a part, will do the right thing.   It isn’t about what I will do; it is about what we will do.  When you are inside the circle you protect everyone else inside the circle from the dangers that lie outside beyond the border of the circle.   In business, those forces may come from competition, workplace conflict, governmental regulations, economic pressures, new technology, or any other number of issues that challenge the long-term success of a business.

Leaders that build their companies with a culture that promotes this type of trust are more likely to freely exchange ideas back and forth without the fear of being betrayed or the fear that someone else is going to steal or profit from their idea.   In simplest terms it means “I’ve got your back because, I know you have my back.”   When we have each other’s backs we move forward.  When leadership allows the culture of a business to shift to individuals seeking personal praise or only looking out for their best interests, it becomes divided and their shield of strength is diminished.

A lion used to prowl about a field in which four oxen used to dwell. Many a time he tried to attack them; but whenever he came near they turned their tails to one another, so that whichever way he approached them he was met by the horns of one of them. At last, however, they fell a-quarreling among themselves, and each went off to pasture alone in a separate corner of the field.  Then the lion attacked them one by one and soon made an end of all four. Aesop, sixth century B.C.

That fable really sums up the Circle of Safety!  In his book, Sinek references several recent examples where the Circle of Safety either never existed or it broke down over time; think Goldman Sachs.   He also referenced several businesses that are clearly focused on the Circle of Safety with their Corp culture; think Costco and 3M.   If you mindfully observe over the course of a week, one doesn’t have to look very hard to find examples of both in our own local cities.

The invention of the 3M Post-It notes is pretty well known, but it really captures the power of the Circle of Safety culture that 3M promotes.   As the story goes, an engineer was working on high strength adhesives for the aerospace industry, he accidentally created the compound for Post-It notes.    Without a culture that fosters a Circle of Safety, his failed adhesive many have never been shared with anyone.   But because 3M’s leadership and culture operates from a Circle of Safety, where employees freely share and exchange information the Post-it was born.

What about your business, is there a Circle of Safety?  Do you have your employee’s backs?  Is there a level of trust?  Or is there a constant fear of being blindsided?  Do you promote yourself over the company?   Simon Sinek said in his research the one comment that confirms a Circle of Safety more than anything else is simply asking someone “Why would do this/that  for him/her?” And the answer is always, “Because they would do it for me”.   Pretty easy test; I encourage you to try it!

As always we value your comments in the space below.   Chris Steinlage Kansas City Business Coach.