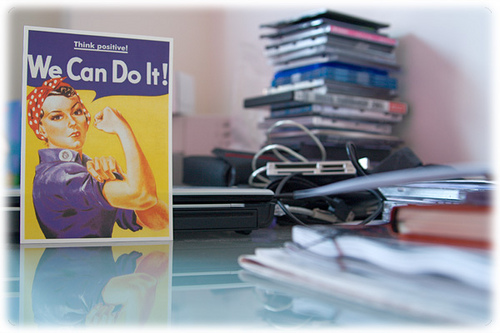 As a business owner, you always have choices on how you run your business.  It’s not unusual to see a taskmaster chewing out their employees and running a tight ship.  You will also find those businesses that are run with encouragement and a high degree of compassion.

The cynics out there will sneer at the power of positive thinking.  It’s all about profits and the bottom line and there’s no room for fluff and nonsense and making people feel good.  These employees are grown-ups, if they can’t handle getting yelled at, then they need to go somewhere else!

On the other hand, the uber-idealists will tell you that all you need is love (or maybe that was the Beatles) and as long as people are happy, the results, the bottom line doesn’t matter.  It’s okay to spend more than you have if it means helping people out and giving them what they want.

Clearly these are extreme examples, but directionally what is the better answer?

Let’s start by taking a look at our very own Kansas City Chiefs!

There’s an interesting take on this in Jason Whitlock’s article today:  Chiefs coach Haley shows how far he’s come .  For those very few of you that don’t know, the Chiefs aren’t a very good football team right now (and haven’t been for several years).  Their first time head coach, Todd Haley has generally adopted the approach of the no-nonsense highly critical manager who yells at his team and his coaches…a lot (maybe not as much as they do in Lawrence…but still a lot).  😉

However in yesterday’s game against last year’s Superbowl Champion Pittsburgh Steelers, Haley went out of his way to be positive and encouraging…and they won!  As Whitlock put it:

Haley coached an excellent football game. He concentrated on play-calling and encouraging his players. He left the refs alone. He didn’t overreact to the mistakes made by his players.

Good things happen when you expect positive results, when you put your mind in a positive place, when you treat the people fighting with you like they have as much invested in the outcome as you do.

Did the Chiefs win because of a positive attitude?  No.  However it’s likely they performed better, and they were able to bounce back after getting behind because they weren’t drowning in negativity.

As a leader, it’s your job to inspire and pick people up.  Yelling and negativity might have a short term effect of driving results, but in the long run it will work against you.

I had the opportunity to do some Social Media training for a local company last week and I was really struck by how they ran their business.  This was a company that was investing serious time and money into their lower level employees – not on job specific skills, but on broader leadership and management training and awareness that would really help them see the big picture in the long run.

Additionally, you could see a real culture of working together and helping each other out.  The employees genuinely enjoyed working there, they appreciated their opportunities and their turnover was very low.

The kicker?  This company is growing so fast that they are struggling to find enough good people (in this economy).  Is that all due to the positive environment?  No – but I can tell you that it certainly helps!  These are employees that will do what it takes to help the company succeed – because they want to, not because they have to.

What kind of environment have you built around your business?  You can believe in the bottom line and still treat people with respect and positive reinforcement.  You may not get the quick response you get with yelling and screaming, but you’ll certainly get a better one – especially in the long run.

Have you seen any great examples of really positive (or really negative) companies out there?  I’d love to hear your thoughts – share them below.