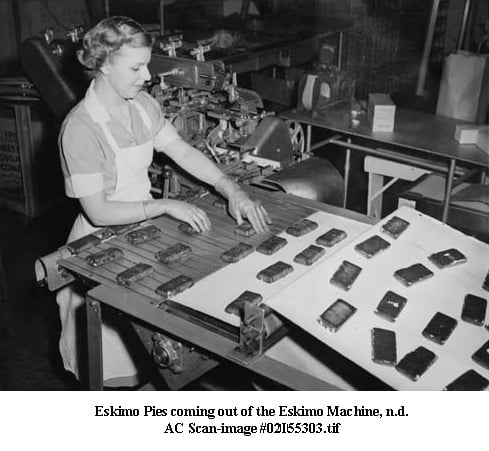 Picture from National Museum of American History via Flickr

Though they never coined the phrase, almost a century before the Midwest started promoting itself as the “Silicon Prairie”, Russell and Clara Stover may have viewed this region more appropriately as the “Chocolate Prairie”.   Their rags to riches story speaks volumes to the power and will of the entrepreneurial spirit.   I believe that same spirit lives in every person who chooses to own a business today and it inspires the passion and creativity of those who boldly decide “There has to be a better way” and set out to prove it.

Over the last century, there has been no shortage of Midwestern entrepreneurs whose paths to success included Kansas City.   For some it was a launching point.  For others it was pivotal stop along the way. And for those who made it their headquarters, it often changed the landscape of the city.

Russell Stover was born in a sod house on the Kansas Plains about 300 miles west of Kansas City near the small town of Alton, KS.   His parents had moved there to farm, though a Kansas drought ultimately forced their family to relocate to Iowa, where they continued to farm.  Russell’s mother died before he was 2.    His childhood included primary school and he did attend college, but dropped out after the first year.

After he married his bride Clara (they met in a candy shop) he tried his luck at farming, partially due to a wedding gift of 580 acres in Canada.  Within a year, the farm failed.   Looking for work, Stover found employment in Winnipeg with a Minnesota candy company which started their journey into candy land.

In 1922, Stover partnered with the creator of what was being marketed as the “I-Scream” bar.  Served on a stick, it was a new concept for an ice cream treat that 7 companies had already passed on producing.   Stover suggested they rename the treat the “Eskimo Pie”, removed the stick, and start promoting it as an ice cream sandwich.  The new name and packaging caught on quickly and the demand exploded across the country.    Unable to fill the demand, they licensed their “sandwich” to 1,500 manufacturers.  License terms:  4 cents / dozen sold.

Initially the profits were very good, but soon there were many variations of similar ice cream products being offered and the cost of defending their patented pie was taking its toll emotionally and financially.  Due to pressures from larger established manufacturers, within 2 yrs. the patent was declared invalid.   Stover ended up selling his interest for a paltry $30,000.

When one door closes another door opens…..

With the debacle of Eskimo Pie behind them, Russell and Clara moved to a small bungalow in Denver, CO.   By this time the young couple both had caught the entrepreneurial bug.  Clara already had a passion for making homemade candies and Russell wanted to build his own company.   As Russell worked on plans to launch a family candy business, Clara worked on recipes to supply the product.  And if you had the good fortune of being a nearby neighbor, you had charter membership as part of the   taste testing lab!

By sharing samples with her neighbors, Clara already had a fan club when “Mrs. Stover’s Bungalow Candies” was launched.  Even without Facebook, Pinterest, and all of today’s social media outlets, the news spread quickly of her boxed chocolate-dipped creations.  By the end of the first year, they had grown from a home-based kitchen operation into a brick and mortar two store business and they also had tested the waters of distribution by selling their product in 7 other stores.

Their confectionary business flourished.  In 1925, they opened their first factory in Kansas City, and in 1932 it became their headquarters.   During this time, growth was hampered by the Great Depression, but remarkably they managed to remain profitable.

It wasn’t until 1943 that they changed the name to Russell Stover Candies and the family business continued to grow.   11 years later, Russell Stover died at the age of 66.    At the time of his death the business was producing 11 million pounds of candy annually.   Their channels of distribution included 40 Russell Stover shops and approximately 2,000 department stores.

From the company’s inception, Russell and Clara Stover had three core values that guided their business:  Quality, Service, and Value.    After Russell’s death those values enabled Clara to continue to lead the family owned business.  In 1960, Clara sold the business to Louis Ward, whose company was a long time supplier of packaging materials to the Stovers.  Using Russell’s founding principles, the chocolate business continued to grow.  Additional factories would be added outside the Midwest roots and in the coming decades the regional business would become an international company.

This year Russell Stover Candies will be celebrating their 90th anniversary and the Ward family continues to own and run the company.    Regardless of the level you aspire your company to become, I hope the next time you enjoy ice cream wrapped in frozen chocolate or bite into your favorite chocolate confection you think about Russell and Clara Stover.  Think about the humble beginnings of that sod house on the Kansas plains, the failed farm in Canada, the frustrations of losing a patent, and the start-up business born in the kitchen of a bungalow in Colorado.    And my hope is that it inspires you!

Please feel free to add any comments in the space below.