Can you Dominate a Niche with Your Business?

Can you Dominate a Niche with Your Business? 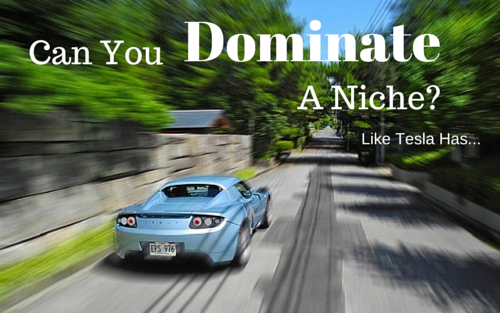 Peter Thiel makes a lot of excellent points in his book Zero to One – the overall theme of the book is a study of what successful innovation looks like (based primarily on tech start-ups). One of the main ideas in the book – that most of the really successful businesses have started by dominating a very specific and limited niche market.

Tesla has a long way to go to be considered a historical success, but they are certainly well on their way…and although their story is one of innovative green technology for the automotive sector, their initial launch was very tightly focused on premium sports cars. They weren’t building a green car that looked sporty…the Roadster is a world class sports car that happens to use green technology.  This sharp focus allowed them to learn, adapt and innovate to a very specific audience and build a focused brand that could expand over time – now they’re starting to dominate the premium sedan market (not just the premium electric sedan market…but overall).

Southwest Airlines – everyone’s favorite business case study validates this idea as well. Despite having a grand purpose to bring affordable air travel to the masses, their initial launch was with a few markets in the state of Texas. Not only did this allow them to (relatively) bootstrap the business but it gave them the opportunity to modify and perfect their business model on a small scale before expanding to the rest of the US.

Mark Zuckerberg started Facebook initially as a platform that was only available for students at Harvard – imagine if he had attempted to launch to the world (which is his market now). He dominated the Harvard online social media market, moved on to other colleges after that before going much broader.

In all of these cases (and there are many more) the initial focus was purposely very narrow with the idea that you need to figure out how to dominate in a narrow niche and then find a way to expand from a position of strength.

How does this apply to the rest of us?

You may not have grand plans to create the next Facebook, Tesla or Southwest Airlines – most of us don’t…which is okay. Nothing works if we try to pursue other people’s dreams and there’s a lot to be said for wanting to be great rather than wanting to be big.

However – that doesn’t mean the idea of dominating a niche doesn’t equally apply to you on your journey towards building a great company.

If your business is fairly new then you still have the opportunity to identify a niche…a focused target market that you believe will hit your sweet spot in terms of what you know, who you know and how you would like to operate.

If you have an existing business, it’s likely that you currently serve a broader audience – probably because you believed that gave you the best chance of success. I can’t tell you how many people I’ve heard explain that they will work with anyone who has a pulse or can fog a mirror. Just so you know…excluding dead people isn’t really focusing on a niche. However…if you look at all the people you do currently work with, it’s likely there is some kind of logical subset of your best clients. Here are some possibilities to consider:

Geographic – do you serve a particular physical area better than others?

Product Focus – is there one product or service that you’re much better at delivering (and enjoy more)?

Customer Focus – what kind of clients / customers do you enjoy and help the most? Is there a logical connection (i.e. they all have kids that play soccer…or they love music…or they like to travel, eat out at fine dining…etc.).

The hardest part about picking a niche is having to say ‘No’ to other kinds of work. As an entrepreneur you’re inherently wired to say you can do pretty much anything. It’s counter-intuitive but the best way to grow is to say ‘No’ to things that aren’t in your niche – that’s the only way you will be able to dominate.

You can expand later…but do it from a position of strength when you have a highly profitable niche that you are dominating and has enabled you to build a great reputation and brand.

What would it take for you to focus your efforts? Have you identified where you’re strongest? Where you already have an advantage? Can you make the leap to saying ‘No’ to opportunities that aren’t in your niche? We’d love to hear your thoughts – does this make sense in your world?