Today’s post is from Stephen Heiner – one of the most entrepreneurial people I know. He’s become a fan of John Warrillow’s work primarily through listening to his podcast Built To Sell Radio.  John is also the creator / founder of The Value Builder System – a great platform / toolset and why we became Certified Value Builder Coaches…!

I first heard about John Warrilow through Shawn Kinkade, who recommended John’s The Automatic Customer to me.  I was in the midst of building a then-nascent subscription podcast service, and Shawn felt that there were some important things that I needed to hear contained in that book.  I loved it, recommended it to others, and as is often the case with authors we appreciate, went on to see what else was on offer.  That’s when I found out about Built to Sell.  The podcast had not yet started up at the time, but I signed up for the mailing list because I loved the concept of Built to Sell’s thesis: dig your well before you’re thirsty, and here is everything you need to build that well.

The podcast then started and I listened to the first episode and was hooked.  Perhaps it’s because I’ve successfully exited a couple businesses and know what that involves.  Perhaps I just love all entrepreneurial stories.  But I think part of it was that I simply loved John’s simple, incisive, and direct questioning style, as well as the wide variety of people he brought on.  Not all were happy endings – and the humility and generosity it takes to share your failures on international radio…well that’s more instructive, perhaps, than the successes.

I had interacted with John on Twitter a bit and he generously agreed to do a short interview for me for the occasional column I write for Shawn’s Aspire blog.  Enjoy!

John – you’ve already managed to record 31 podcasts for Built to Sell Radio.  Does it feel like that many already? 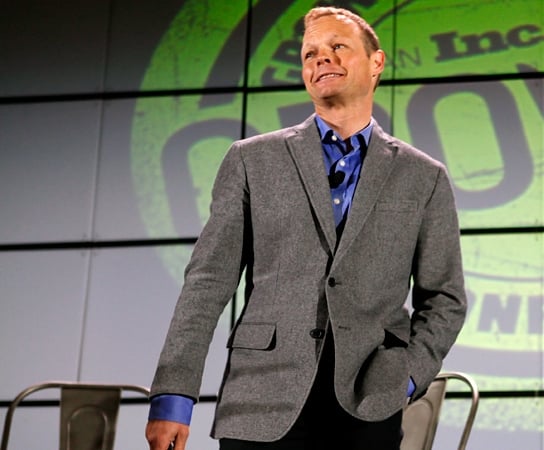 Why did you decide to do podcasts?  Were you an avid podcast listener prior to starting one yourself?

No. I had been writing for Inc. for a few years and was frankly out of things to say. Back in the early 1990s I produced an audio magazine for entrepreneurs where I sent out audio tapes (I know, I’m dating myself) of interviews with entrepreneurs about how they become successful. In a funny way, Built to Sell Radio feels like deja vu.

How is the process different for you?  Is writing a book easier/more satisfying?  Or is podcasting?  Why/Why not?

Podcasting is very easy. It’s just really a conversation for an hour. The trick was getting our systems worked out. I have a great team that runs the show including someone who researches and finds guests, someone else who confirms the guest and someone else who prepares the show notes and handles the social media promoting each show. All I do is the interview which is the easy part.

What’s the most striking thing you’ve heard in these first 31 episodes?

As I think about the entire collection is the breadth of different valuations I’ve seen. Some people like to talk about valuation as a science and get very snooty about the technical nuances of valuation, but if there is anything that the first 31 episodes of Built to Sell Radio proves, it is that valuation – like beauty – really is in the eye of the beholder. Two acquirers can look at the same set of facts and statistics and arrive at valuations wildly different.

With the ability to look over these same episodes, what do you feel are the two-three consistent “to-dos” of every business owner considering exit?

Don’t negotiate your own exit. If you were selling your home, you’d hire an agent and for the same reasons, you should have an intermediary (broker or M&A professional) represent you.

Negotiate from a position of strength. The guests who have had the most successful exits re the ones who were not looking to sell when they were approached

I get a lot more personal feedback from the podcast than when I was writing regularly for Inc. The medium is more personal and people feel like they know me so often reach out as if we were friends.

Do you feel it’s fair to say that the guests you’ve had so far are making the argument against earnouts?  Does this correspond with your experience?

Earnouts are the enemy for entrepreneurs. I’ve interviewed hundreds of entrepreneurs about the topics and a tiny percentage (less than 10%?) have a good story to tell. Some hold their nose and stick it because so much money is at stake and a large portion of owners hit the eject button before their earn out is done.

More than once we’ve heard that marriages have collapsed either around the building of a business or its sale.  I’m not asking you to be a marriage counselor – I’m asking how do we involve spouses in this entrepreneurial journey better to – maybe – stop something like that from happening?

So true! That is one of the most disturbing trends I see. I’m not sure I have much to add here other than to ensure you have lots going on in your life other than business leading up to the sale.

A fair number of your guests turn us on to their newest businesses at the end of their time with you.  I guess it really is true that there is an entrepreneurial bug, no matter how many millions are stashed in the bank.

Correct. Perhaps two or three have retired but most are on to a new venture. I think corporate types spend years stuck in a soul-sucking job they hate – just putting in enough time to be able to retire. By contrast, entrepreneurs get to be creative every day and most find that a drug tough to kick!

John, thanks so much for your time.

Well thank you for the questions and listening to the podcast!