Are you sweeping your dirt under the rug?

Are you sweeping your dirt under the rug? 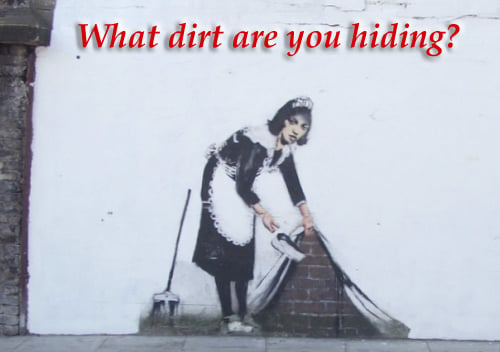 The problem with sweeping dirt under the rug is eventually the lump under the rug gets so big everyone who walks on the rug starts tripping over it.    In business, the dirt is usually an issue that no one wants to deal with…and so instead of dealing with it, they avoid it (effectively sweep it under the rug).  It’s the type of problem where at first it may not be affecting anyone, but left unresolved eventually is can affect everyone in the business, including your profits, your customers and your employees!

“The problem with sweeping dirt under the rug is eventually the lump under the rug gets so big everyone who walks on the rug starts tripping over it.”

If this sounds like something that happens in your business, you are not alone.     Joseph Grenny, one of the authors of Crucial Conversations estimated that employees (not including HR or management/ownership) waste an average of $1,500 plus an entire 8 hour workday for every conversation they avoid.   Or in other words… the dirt they sweep under the rug.   That is a staggering number.

Even more dramatic is that 8 percent of these employees estimated that avoiding the problem was costing their company more than $10,000.   And 1 out of every 20 admitted to “sweeping the dirt under the rug” for more than 6 months.   That’s a lot of money and a lot of impact. Knowing that most businesses are working in an environment where profit margins are critical to long term success, it makes a pretty strong case for making sure you are dealing with issues head on and in a timely manner.

Here are a few things Grenny suggested you could do to get started:

If you’ve got some dirt piling up, you need to act.  Doing nothing is not an option; not if your goal is to build a sustainable profitable business.   And no, there are not any businesses that are 100% immune to this.   However, there are ways to mitigate the potential of having issues that get swept under the rug.  It starts with communication and establishing a value system that guides your company. When you have the ‘right’ people, they will be engaged and looking out for the greater good.   When the lines of communication are open and the core values of all of the employees are aligned, it will increase the likeliness that challenging issues will be dealt with as they come up.

So if there is a rug in your business that has started to become a tripping hazard it may be time to get the dirt out from under it.   You wouldn’t want an employee or customer to trip over it.  Lawsuits can be expensive!