5 Ways Your Business Can Fall Off the Cliff

5 Ways Your Business Can Fall Off the Cliff 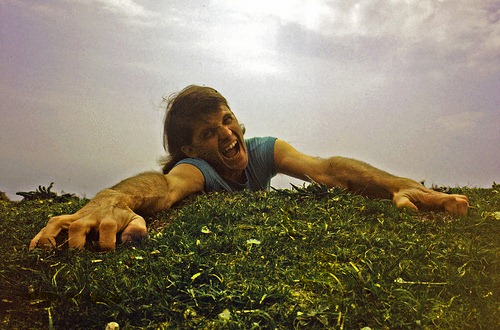 As a business owner do you ever feel like you’re struggling to hang on by your fingernails?  Most of us have been there at one time or another – in fact it turns out there are some predictable reasons why you might be at risk for having your business fall off the cliff.

If you haven’t had a chance to check out Jim Collins latest book ‘Great By Choice’, you’re missing out on a new business classic. (I just did a Business Book Review on the book and if you can pull together 8 to 10 people – I’d be willing to talk about doing a Business Book Review for you if you don’t have time to read it).

Like all of Collins books, Great By Choice is grounded in research and analysis…in fact it took a team of 20+ researchers 9 years to develop the conclusions in the book.  Their goal was to answer the question:

“Why do some companies thrive in uncertainty, even chaos, and others do not?”

Using a bunch of data and a very scientific approach they identified a handful of very successful companies who dominated in chaotic, uncertain industries…and they identified their counterparts who…fell off the cliff.

The really interesting part came out of figuring out what these companies did (or did not do) compared to their failing peer companies.  Did they innovate more?  Did they have a better crystal ball?  Did they work a lot harder? Take more risks? Were they just luckier?  The answers were surprising and generally not what you’d expect.  Collins and his team focus on what to do to succeed, but there’s another clear message here: if you aren’t following these ideas, you’re likely to fail (and fall off the cliff).

What are the concepts that lead to success or failure?

1. Slow and steady wins the race

It’s not as cliché as it sounds. Collins and his team discovered that the successful companies all shared a strategy that he dubbed the ‘20 Mile March’.  They used fanatic discipline to insure they made healthy progress every single year based on a key performance indicator.  As an example, at Stryker the CEO imposed ‘the law’ that the company would achieve 20% net income growth every year.  During the 21 years of the CEO’s tenure, the company hit that goal over 90% of the time.  Equally important…the company pulled back on growth many times during that period in order to stay in control.  The idea is to stretch, but not too far.

Question:  Do you have a clear, easy to follow stretch goal that your entire team is completely focused on every year?  Do you have the discipline to hold back on opportunities when things are going very well?

2. Try before you buy

Before you buy an expensive car, you’re going to take a test drive.  Before you buy new music from a band, you listen to samples online.  Collins discovered that the successful companies rarely jumped into unproven ideas.  Instead they would find creative ways to try things out on a small scale…and if the results made sense, then (and only then) they would jump in with both feet and execute strongly.

The unsuccessful companies did things differently – they would identify a new idea, talk it through, maybe do a focus group and if they thought it looked worthwhile…on paper…they would make a big investment and hope for the best.  Their odds of success were low (much lower than the successful companies who did actual trials) and the cost of the failures were a big reason why these companies didn’t succeed in the long run.

Question:  Are you trying things on a small scale before you make those big bets?  Are you in a position to really be able to track your results in a way that’s meaningful?

3. Live within your means

The ‘Great Recession’ has recently taught this lesson to everyone all over again.  Houses don’t always increase in value, bad things can happen to anyone at any time and if you owe a lot of money for credit cards or loans, you are in a very risky position without many options.

It turns out those lessons don’t just apply to families, they also apply to large companies.  Collins and his teams discovered that the successful companies were ‘productively paranoid’ – hoping for the best, but planning for the worst.  They kept their debt levels extremely low and made sure not to over-extend, even if that meant passing up on great market opportunities.  The unsuccessful companies ran just the opposite – leveraging everything they could at every turn and hoping and praying that nothing bad happened…which of course eventually it always will.

Question:  Are you clear on how much ‘Runway’ you and your company would have if things suddenly went south?  Are you constantly scrambling to make payroll?  What could you do to start building up some reserves?

If you’ve ever tried to cook something from memory without the recipe…then you know it can be a dicey result.  Everything might turn out fine…or it all might go horribly wrong.  A proper recipe is based on someone trying something and documenting what worked and what didn’t.  Without following the recipe, you’re open to random outcomes and a lot of time spent re-inventing the wheel.

Every one of the successful companies had their own recipe for success.  A fairly short, simple list of rules of what they do…and just as importantly what they don’t do.  More importantly, once the companies identified the keys to success…they didn’t mess with them.  They consistently executed and stayed focused without changing the recipe.  The failed companies sometimes used a recipe, but were very likely to make big changes as they went…negating any long term benefits.

Question: Do you have a simple list (written down) of rules that everyone follows?  Do you know what drives your success?  Does your team know?

The research team went to the unusual measure of studying luck…and it turns out, luck, both good and bad, happens to everyone in pretty much the same amounts.  The real difference in long term success lies in your reaction to luck.  When the successful companies had bad luck, they were prepared (because they planned for the worst) and they took charge of their response and didn’t play the victim.  Conversely when they had good luck, they had the discipline to take a measured response and they executed…within their means.

The failed companies tended to blame the world when things didn’t go well.  And they tended to be unable to follow through successfully when things rolled their way.  In short…

Question:  What’s your reaction to luck?  Are you likely to play the victim?  Do you have plans in place that will help you
overcome bad luck?  How about to take advantage of good luck?

There are lots of ways you and your company can fall off a cliff, but if you consciously adopt these 5 behaviors, your odds will be stacked towards long term success.  Much of this is common sense…but it turns out that common sense really isn’t so common any more.

Which of these traits do you most identify with?  Which one do you need to work on?  We’d love to hear your thoughts – leave them in the comments below if you get a chance.