3 Things Your Business Can Learn from Seinfeld’s ‘Soup Nazi’

3 Things Your Business Can Learn from Seinfeld’s ‘Soup Nazi’ 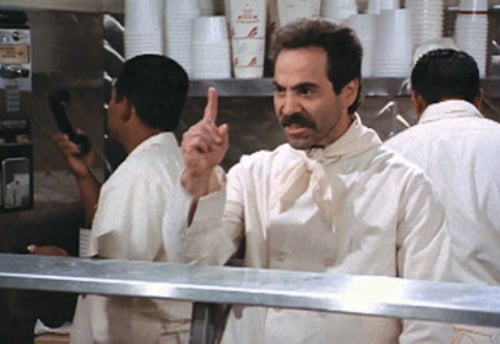 Seinfeld’s ‘Soup Nazi’ – No Soup For You

Sometimes when you channel surf late at night you get lucky…and you run across a great Seinfeld rerun. Last night I happened to catch ‘The Soup Nazi’ episode – which if you happen to be one of the small number of people who hasn’t seen it, is about an amazing new soup restaurant that’s opened up and has started a soup craze in New York. However the brilliant chef that runs the place is seriously hardcore – if you don’t follow his rules to the letter…then it’s “No Soup For You!” and you’re immediately kicked out of the restaurant.

It’s a great episode…definitely worth finding if you haven’t seen it. If you’re interested you can find highlights on Youtube. But this episode is more than just a piece of pop culture history – it also has some great business lessons to share.

#1 Word of Mouth Requires more than just a great product

Jerry, George and Elaine first hear about the ‘Soup Nazi’ from Kramer…but what makes the restaurant remarkable is more than just the great product (although that’s critical as well) it’s that the owner will yell at and ban anyone who doesn’t follow his ridiculously strict rules.

It’s the combination of things that really set the ‘Soup Nazi’ up for successful Word of Mouth. According to the bestselling book Contagious – Why Things Catch On by Jonah Berger, the Soup Nazi phenomena covers multiple principles that makes things go viral.

It’s probably not a great strategy to start being really rude and kicking your customers out, but it may be worthwhile to be selective…or to have a clear code of who you work with – and if you can make that into a great story…even better!

#2 Play to your strengths if you want to stand out

Kramer describes the ‘Soup Nazi’ as a tortured genius…a true artisan when it comes to Soup. Imagine if the ‘Soup Nazi’ had instead opened a full service diner…and spent 2/3 of his time making burgers, sandwiches, breakfast, etc. The food would have probably been good, but not great. The soup might have still been great, but it would have been buried in a big menu and not stood out – plus the chef wouldn’t have the time to really innovate and create the best possible soup with all of the other dishes that would need to be made. In short it would have been an average diner, doomed to mediocrity.

You’ve got to narrow your focus down to what you’re really good at. It’s only at that point that you will be able to stand out as a genius. That’s when people will stand in line to work with you, that’s when they’ll pay a premium for what you do. Not when you’re trying to do everything…or working on your weaknesses.

#3 You’ve got to figure out a way to scale

They don’t cover this in the show, but clearly a major reason why the ‘Soup Nazi’ is unhappy is because he’s working really hard. He’s on the front line of the restaurant, serving the soup and enforcing the rules. It’s pretty obvious that if the ‘Soup Nazi’  calls in sick one day, the restaurant is just going to close. Imagine never having a day off, only being able to sell as much soup as you can make and dish out in a day…all in all, an exhausting business.

Are you constantly working really hard in your business? Is it all about you? If you’re on the top half of the matrix of Effort vs. Success, then you need to figure out how to automate, delegate and systematize what you do to get yourself off the front line. If you can’t figure that out, then you’re doomed to be unhappily slinging soup all day long without a break.

What lessons can you learn from the ‘Soup Nazi’? We’d love to hear your thoughts – share them below.