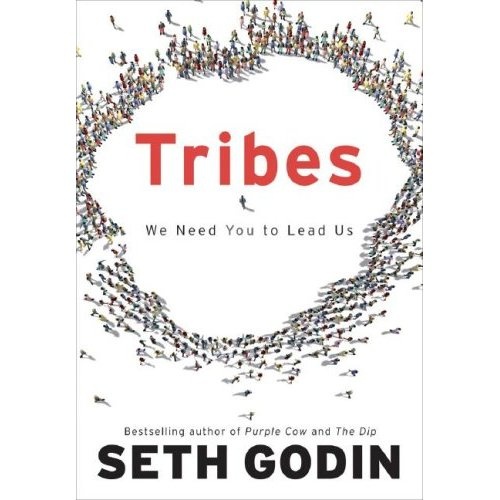 It would be easy to dismiss Seth Godin’s latest book as a way for him to cash in on his (hard earned) reputation as the Marketing Genius of our time.

For those that don’t know him – Seth Godin (you can read his frequent updates at Seth’s blog) is an author of many books, including Permission Marketing, Purple Cow and Meatball Sundae.  Not only is he a compelling writer, but he also has a history of illuminating (perhaps leading) changes in the marketplace that we’ve been seeing the last 10 years.

At first glance, Tribes appears to be more of the same – written in a stream of consciousness style almost as a collection of blog posts (which is likely where they started).

However the real value of Tribes is the ideas that get sparked from the conversation it feels like you’re having with Mr. Godin.  Here are a few that came to me when I read it:

There will be always be a place for management, but what the world desperately needs now is more leadership.  Management is about continual process improvement – incrementally improving things but fundamentally keeping the status quo.

Leadership is about creating change that you and others believe in.  (I don’t know if Obama borrowed it from Seth or if they came up with it independently, but I like the definition).

The reason that leadership is so important, now more than ever is that the world is changing faster than ever – either we are collectively out there changing it in a way we can be excited about, or we’re all victims of the changes, which won’t end well.

The World has already changed

Along those lines, the business world doesn’t work the same way it did 5 years ago.  You can not be successful in the long run by pushing yourself or your product onto your prospects.  You can’t trick them into buying using a clever closing technique, you can’t get away with offering a sub par product and glossing over it with marketing.  The market wants transparency and if you don’t have it you won’t succeed.

Technology is part of the reason the world has changed, but technology is almost a symptom of the change – people are inherently looking for answers, people, things they can trust.

Push beyond the fear

Fear is clearly a four letter word.  Without fear, most of the media outlets wouldn’t know what to report on.  However the only way to push through to success is to take positive actions despite your fears and make things happen.

Sheepwalking is a concept that I’m very familiar with (as most people with corporate experience are) but I didn’t have a name for it.  Here’s the definition:

Sheepwalking is the outcome of hiring people who have been raised to be obedient and giving them brain-dead jobs and enough fear to keep them in line.

How many people have you worked with (or for) that did things just because that’s the way it’s always been done?  If I had to pick out one thing that will eventually bring most big companies down, it’s the continued focus on killing any inspiration or initiative, keeping people from ‘rocking the boat’.  Sheepwalking at it’s finest and the scary thing is that our educational system encourages this mind set – it’s bad now and if we’re not careful it’s going to get worse.

Do you have any examples of sheepwalking?

Part of the process of leading requires you to take a stand and put something out there.  You will fail at some point, maybe repeatedly.  However the big picture isn’t the specific result, it’s the act of taking action and doing something different or new that really makes the difference in the long run.

Doing nothing or sheepwalking to avoid risk is the sure way to fail in the long run.

All in all, I would highly recommend Tribes – you won’t find any answers there, you likely won’t even come away from it with a clear idea of what you should do or could take action on.  But you will come away with some new questions, some new insights and some new thoughts – which makes it a very valuable book indeed!

Share your thoughts on this post or the book if you’ve read – I’d love to hear what you think.