Click start below if you’d prefer to listen to this week’s article…and let us know what you think by leaving a comment. 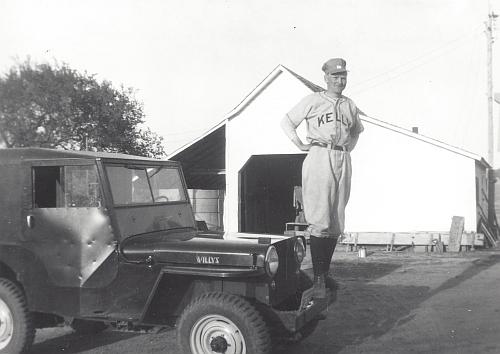 This is for dedicated to all the fans of baseball past and present.   Next week we’ll get back to business.

He was born and raised about 100 miles NW of the current Truman Sports Complex.  He was a dairy farmer by trade, but those who knew him will tell you when it came to sports, baseball was his favorite.  As a young man, he played baseball on a local team comprised mostly of other young farmers who also had a passion for America’s pastime.   And, as I understand it, most of their games were played on Sunday afternoons, because a lighted ball field was a luxury that most teams didn’t have in rural America in those years.

Because the Royals quickly established themselves in the Major Leagues; in his lifetime he never experienced many years of the Kansas City Royals not being expected to compete for the American League title.  Today, that’s hard to believe, but the last season he saw them play was 1989; the infamous 92 win season that many baseball experts think may have been the best team the Royals ever fielded.   Unfortunately, that was before the expanded playoff format and the third best record in baseball only earned you a spot on the couch in front of a TV to watch the remainder of the season play out.

He loved his baseball.  When the Royals Stadium first opened, one of the first family vacations was a Kansas City trip to World’s of Fun and a Royals game.   The family may have enjoyed the entire trip, but make no mistake, the amusement park was for his kids, and the Royals game was for him.  In the years that followed, most summers usually included at least one trip to Royals stadium.  One of his favorite positions was first base, at 6’ 3” that had been his regular spot “back in the day”.  For the Royals,  Big Bad John Mayberry and Steve Balboni were two of his favorites to play the #3 post during the 70’s and 80’s.

As Royals fans know, from day one in Kansas City the voice of the Royals has been Denny Mathews.  During the baseball season on the farm, Denny’s voice was part of milking cows, throwing hay, and doing other work around the farm.  If there was an AM radio nearby and a game was on, you can bet he had it tuned into WIBW 580 out of Topeka.   Few games were on TV and even if they were, unless it was Sunday afternoon, Denny’s call over an AM radio mounted on a tractor fender, usually won out over the RCA console TV and recliner in the living room.

When his boys were old enough to play baseball, the rural community he called home his entire life did not have an organized summer baseball team.  So he, along with two other farmers in the community decided it was time to start a summer ball club. Apparently, his past baseball playing experience, coupled with his 8th grade diploma and Army GED was enough to qualify him for that role.

Funding was simple; they held a pancake breakfast in the church basement before each season.  The proceeds of that breakfast plus a little revenue from concessions provided enough to fund an entire season.   During the early years, the home games all had to be played on Sunday afternoon, because the field still did not have any lights.  In time, lights were added and eventually a score board, bleachers, and an enclosed concession stand.

He would go on to coach for years while all 5 of his sons played through the 3 different divisions that spanned from elementary thru high school age farm kids.  It truly was a “farm system” in the purest sense of the word.  Over the years his teams collected a number of league trophies.  As good coaches will attest, winning is the goal, but win or lose he wanted his players to have fun, knowing that both ends of the scoreboard were character building lessons in their own way.  Today, his oldest son still continues that family coaching lineage on that same baseball field.  As a side note, over the last two decades his son’s team’s aggressive base stealing tactics would make Rusty Kuntz and Ned Yost proud, but that is another story!

This year is the 25th anniversary of that 92 win season and the passing of my dad, Lambert Steinlage.  He would absolutely love this Royals team.  The young rising stars, the veteran leaders, their never quit attitude, their passion and energy, the team chemistry, and the fact that so many are home grown through the farm system.  He would love it all.  But mostly, I think he would love the way they have fun playing the game.  Dad, if heaven has a front row seat, I hope you’re in it.  Win or Lose, this is going to be a lot of fun.  Let’s Go Royals!

7 thoughts on “He Loved Baseball…”