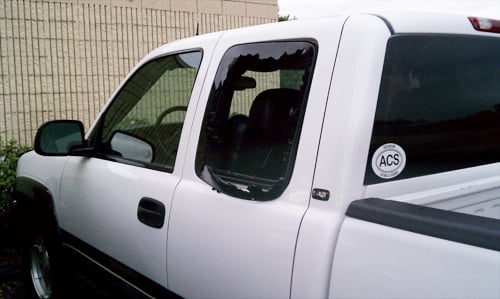 It is one of those things you think only happens to people you don’t know, but this past week it happened to me. It was midday, between 10:30AM and 11:45AM, in broad daylight. Through the tinted rear windows of my pickup, someone spied my briefcase and decided they needed it more than I did. And just that fast I said goodbye to my laptop, my portable scanner, a digital recorder and other personal items.

I don’t need to remind myself of the obvious, you shouldn’t leave a briefcase setting in a parked car, but the meeting was only supposed to last 90 minutes and it was the middle of the day! What was the risk? It wasn’t the first time I have experienced an auto break-in, shortly after I graduated college I learned not to leave $2.00 in quarters visible in the console between the front seats. Those 8 quarters cost just under a $100 (the window repair).

During the years I owned my construction equipment dealership, I had at least three memorable events where thieves or (would be thieves) went after tools and equipment at the dealership. In one incident our crook was surprised around 5AM, by a semi-truck driver preparing for an early morning delivery. Prior to the driver arriving at the dealership, this bandit was using a forklift to literally pile brand new pedestrian trenchers ($7,000-$10,000/ea) on top of each other on a trailer. He also had loaded a large air compressor on the back of his flatbed pickup. When the truck driver spooked him, the coward sped out of the yard and the cargo on the truck bed rolled out into the street as he whipped out onto the boulevard. He never ended up getting a single machine, but the damage he caused to the machines was pretty significant. But we scored it a victory for the good guys.

In round two, I wasn’t quite so lucky. We had a few small machines that were powered by a 25 HP Kohler gas engine. One Monday morning I arrived at the dealership to find 6-8 brand new machines setting in the equipment row without their engines! This time the crook(s) accessed the lot through a small fire hydrant access gate towards the rear of the property. Each engine was worth about $2,000. After that, I spent about $10,000 on a perimeter monitoring system, which I must say seemed to throttle down my issues with break-ins.

Maybe I was overdue. I know there are millions of laptops and portable devices stolen every year, and many of you reading this have probably experienced it first hand, so I am not alone. But it was the first time it happened to me. I just hope the crook really needs the couple hundred dollars he is going to get hocking my stuff. Maybe I should have posted a big sign by my truck offering $1,000 for the prompt return of the stolen items and started shouting the same. If he was still in earshot it would have been a great way to increase his ROI about $800 and I wouldn’t have had to go through the process of changing all my passwords, account numbers, and electronics!

There are several options to track computers if they are stolen and now that it’s happened to me I have been motivated to seriously consider that option. I am pretty good about backing up my hardrive and we use google apps so most of my information will land back on my new laptop. And the pity party I was having over the ordeal was promptly halted and put into perspective by a caringbridge post about a friend the following morning. There are worse things to deal with.

With the holidays just around the corner I thought sharing this would be a good reminder for all of us to not leave valuables in your car. If you do, don’t leave them in plain sight. Don’t make your vehicle an easy target. And regarding your computer(s), if you don’t have a good plan for backing them up, the time to start one is not the day after your hard drive crashes or gets stolen.

If you would like to share any thoughts or ideas on this please do so in the space below. And if by chance someone offers you a screaming deal on a 10 month old Toshiba L755-S5167 SN SZB165364W…please give me a call.